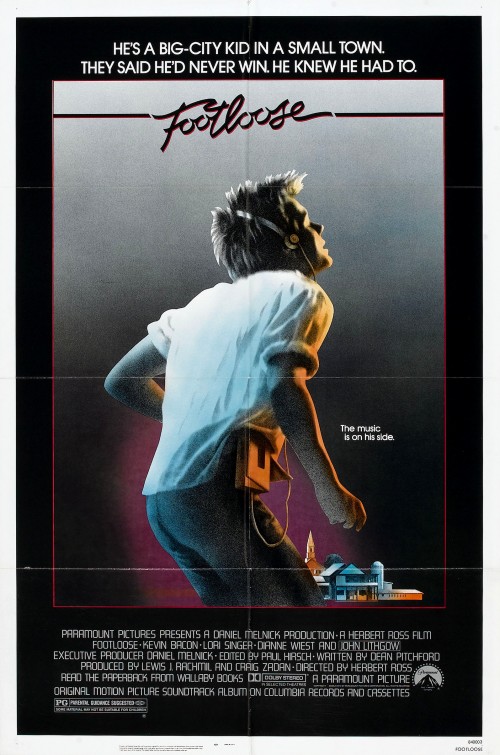 From the opening titles to the exuberant finale, “Footloose” is a ridiculous 1980s musical. Like “Flashdance” and “Fame” before it, the movie flirts with being a Hollywood musical but stops just short. The characters here never break out in song, but for some reason it seemed acceptable at the time that movie characters break out in dance.  So we are spared hearing Kevin Bacon warble through “Let’s Hear it for the Boy” but we do get to see him boogie down at the big dance and solo through an acrobatic display of dancing and gymnastic agility in a barn.

Herbert Ross was an accomplished director who had two films that he directed nominated for Best Picture in the same year. (The Goodbye Girl and The Turning Point 1977). In the 1980s he had a string of films with comedies, dramas and other pseudo musicals like “Pennies From Heaven”, “Nijinsky”, and “Dancers”. “Footloose” was the biggest commercial success of any of those 1980s film. His familiarity with dancing and his touch with light melodrama made him a solid choice as the director of this film, which combines some interesting dance sequences, with comedy to make a satisfying youth picture.

Kevin Bacon had been in a number of features before this film, notably “Animal House”, “Friday the Thirteenth”, and “Diner”. This is the film that made him a breakout star. He has worked so consistently since that he is nearly at the center of the Hollywood Universe (Six Degrees of Kevin Bacon, although Dennis Hopper is in reality at the center.) This was his first leading role and he had the charisma and sex appeal to become something of a sex image for the 1980s. With his loose fitting tie, feathered hairstyle and blueish eyes, his image adorned girls bedroom walls and tee shirts. While he has been a successful actor, he has never had the same heat afterwards that he had off of this film.

At the time the film was released, a story appeared in the L.A. Times about a short documentary feature covering the subject of small towns that literally had the kind of dance restrictions depicted in the movie. I remember this because it was made by a guy on the Trojan Debate Team for about a semester. He debated with one of my former partners and I think his name was Jim Petrovich. I never saw the film but I did think it was interesting that there is a part of the culture that really felt this way and enacted rules to reflect that culture.

The soundtrack for “Footloose” was everywhere in 1984. There were six top forty songs from the record, yes in those days they did release LP records. The title song and “Let’s Hear it for the Boy” both reached the number one position. “Almost Paradise” was a top ten song. The album was certified 9X platinum, meaning it sold more than 9 million copies just in the U.S. Kenny Loggins was the King of the movie soundtrack world, having hits with this, “I’m Alright” from “Caddyshack” and “Danger Zone” from “Top Gun”.  None of the music was cutting edge, it lacked any punk influence and did not fit with the New Wave hits of the day, but Pop music was much broader in those days and could accommodate a wide spectrum of musical tastes.

John Lithgow was just becoming a star, he had broken out in “The World According to Garp” a couple of years before and was in such high demand that he filmed this movie at the same time he was doing “Terms of Endearment”.  Diane Weist has won two Academy Awards for Woody Allen films since this came out so it was something of an early attention grabber for her as well. Lori Singer, who was cast after a number of other well known actresses had turned down the part, was the “It Girl” for about two minutes after this film came out. She never did reach such a high profile again after this. Chris Penn, sadly died young and after he sank into drugs and lost the boyish charm he had in this film. It’s hard to think he later played “Nice Guy Eddie” in Tarantino’s first film and the bigoted Sheriff Dollard seems like a cliche that wasted all the talent that he seemed to show.

The Front and Back cover of the Laser Disc that I used to revisit this 1984 film.

As I re watched this I enjoyed the story of the struggling minister and his daughter quite a bit. There is a poignant story here about a family running from sadness and making things worse for themselves. That the whole down is going with them is also pretty clear. This movie was made when several states still allowed 18 year olds to legally drink, and the so called “Blood alleys” between the states with higher age limits and those with lower drinking ages were littered with teens killed in drunk driving accidents. That forms the basis of some of the rules the little town of Beaumont has imposed, and the locals start to get carried away by their enthusiasm to protect their kids. Lithgow gives a heartfelt effort at showing us a father and a minister trying to care for his child and his flock and not knowing exactly where the lines should be. The small town politics is played fairly, the kids can’t quite overcome the system but they win in the end by finding a way to circumvent the rules. The local bullies get a pounding and it turns out that the adults learn to respect their kids and the reverse happens as well.

The movie itself is full of teen angst and rebellion. Ren has lost his father, Ariel is estranged from hers, and everyone in town is a bit of a caricature. There are pieces of “Rebel Without a Cause” and “Romeo and Juliet” layered into the story, but mostly it is an excuse to allow young people to dance on screen. The sequence where Bacon instructs Penn in basic dance moves is one of those obligatory montage scenes that works both at making the progress seem believable, but also building character and humor between the two young leads.

The friendship between the two guys was as much the focus of the story as the romance between Bacon and Singer. The idea of Ren teaching a big galoot like Willard some smooth dance moves is funny at first. Most regular guys shy away from dancing and this plays on that reluctance well by putting the training into the context of the story and the environment where they are supposed to live.

When all that practice pays off at the big dance at the end, you can’t help but laugh at the John Travolta pose that Willard strikes and that surprises his girl played by Sarah Jessica Parker.  The movie is just what it needed to be for the times. A light confection with enough of a story to get our hearts involved, The music and the dancing does the rest.