Watching this movie again for this project has been one of the best experiences of the new year. It may not be the finest movie, the most challenging film or a game changer, but it is the most patriotic movie I’m going to see this year. That says something about a movie set for most of it’s first half in Russia. You will know why it mattered the U.S. stayed strong in the face of the cold war, and not a shot is fired by any soldier or warship. This is a movie about “Freedom”, from the point of view of someone who can barely contemplate the concept because of the world they live in. 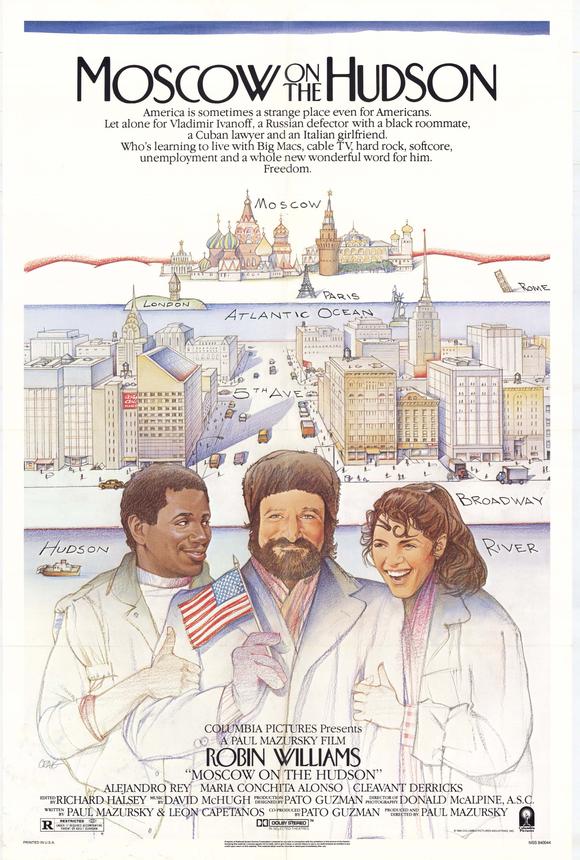 Robin Williams gives a great, subdued performance as Vladamir Ivanoff, a musician from a Russian circus who comes to America and finds that “Freedom” is a lot of things, some of them painful, but in the end mostly life affirming .

After watching this film and looking back on other movies made by writer/director/actor Paul Mazursky, I realized I was a bigger fan of his movies than I thought. There are more than a half dozen of his films that I enjoyed immensely when I saw them in theaters, and I just had forgotten how consistent he was in the seventies and eighties. “Moscow on the Hudson” might be his most accessible film because it speaks to a shared longing that most of us have and it does so in an honest if somewhat sentimental way.

The story opens with a long  sequence featuring the daily life of residents of the capitol of the USSR. The world is grey and cold and damp, but it is not the weather than holds most of the population down, it is the political system. The workers paradise is actually a bureaucratic thumb being pressed down on the citizens. Goods are scarce and  people queue up for whatever is available, the dream of many is to actually get some toilet paper. Gas is sold out of the back of trucks in a black market, and dissident thought is punished by banishment to mental institutions for corrective thinking. The Soviets were the model for George Orwell’s 1984 and they appear to have tried to live up to the image. Vladamir has a loving family, that he lives with in a small apartment.

His parents, sister and grandfather all share the space that would be close quarters for a couple. His father even encourages him to get married so he could qualify for an apartment of his own. He has to borrow the more spacious apartment of his friend from the circus, a clown who dreams of coming to America and living a life of freedom, to be able to have a romantic interlude with his girlfriend.

The small indignities that the Russian people are subjected to begin to wear on Vladamir and his friend. The KGB actually want Ivanoff to spy on his friend. The not so subtle threat to institutionalize his eccentric grandfather is the motivation to betray his friend’s trust. The KGB officers attached to the circus have reason to be suspicious, the clown indeed is planning on defecting in an upcoming performance of the troop in New York City. 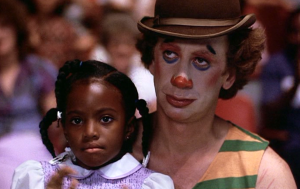 His spirit is being crushed by life in the Soviet Union and even though he has privileges as an artist and performer, they are not enough to satisfy his heart. He shares his plan with Vladamir and a seed gets planted that sprouts in a visit to Bloomingdales. The whole circus visits the landmark store after their performances in the city just as they are set to return to Moscow. The lachrymose clown is unable to break free and settles for staying with the circus on it’s return home. His saxophonist friend however, in a moment inspired by his friend’s despair, makes the leap to freedom by choosing to defect. If you were born after the fall of the Berlin wall, you may not understand the significance of defecting as a political act. In the decades of communist dominance in Russia, many artists, writers and political dissenters chose defection as an escape but also as a form of protest. The Soviet Union was a very closed and closely monitored society. When the Moscow Circus visited the Los Angeles area in 1968, the headliner of the show was the famous Russian magician Kio. Somehow, my father and he managed to connect and he and his wife came to our house for a visit, accompanied by two “officials” from the circus. Any departure for the west of a prominent Soviet citizen was a humiliation that the Russians were loathe to experience.

Robin Williams touching relationship in the film with his grandfather and the clown, have made him a sympathetic character for us at this point. His sudden moment of action is both cathartic and hysterical. An up scale American department store might seem an odd place to choose to defect but the lavish abundance seen in every aisle and on every floor make it obvious to Vladamir, that the life he was leading in Moscow was a dead end.

He finds a friendly sales clerk and a sympathetic security guard and declares his intention to stay in America. The chase by the KGB up and down the escalators of the store and through the various departments is a light moment played for laughs but the arrival of the police and U.S. officials was a moment of spontaneous cheering for the Americans in the store watching. Vladamir sadly sees his friends in the circus drive away on the bus to the airport but he is staying, even under a cloud of uncertainty about his future and whether he will ever have contact with his family again.

The security guard is named Lionel, and he offers to let Vladamir stay with his family. For a time it seems like our Russian hero has traded one cramped family living situation for another. The sales girl is Lucia, an Italian immigrant played by Maria Conchita Alonso. She and Vladamir are attracted to each other and they begin a romantic relationship. William’s character learns from his hard nosed but friendly immigration attorney that money makes the world work in America. Vladamir begins a series of random jobs just to help make ends meet. This is one of the places in the movie where William’s natural exuberance and comedic personality gets a chance to come out. The striving immigrant becomes the key character in the rest of the story.

This is where the movie earns it heart. It seems everyone in NY is an immigrant. Taxi drivers, dish washers, street corner vendors are all new to the country and happy to be here in spite of the long hours and hard work they must go through on a daily basis. Lionel and his family are the only “Americans” in the story, everyone else is from somewhere else. The fact that Lionel’s family is black, is just one more indication of what a diverse place the American culture can be.

Everyone struggles but for the most part they are all struggling together. Most of the people Vladamir encounters are warm and supportive. His striving attorney Orlando, played by Alejandro Rey, is a Cuban refugee, and even though he demands to be paid, he is also a good friend. Lucia and Vladamir have the usual falling out that occurs in a romantic comedy, for reasons that are not entirely clear. She is sponsored by her Uncle who slightly disapproves of Vladamir, but everyone shows up together for one of the highpoints of the story. Lucia is becoming a citizen of the United States. As she stands to take the oath of citizenship in court, Vladamir, Lionel, Orlando and her Aunt, Uncle and Grandmother look on. The judge in the court delivers an inspiring message to the hopeful new citizens and forty or fifty new Americans, from dozens of other places are born. Frankly I choke up every time I see one of those ceremonies on the news. I am lucky to have been born an American citizen. Watching those people who are choosing to become Americans and have worked hard to achieve that objective make me conscious of how blessed we really are to live here. I guess I still buy into that whole “Land of Opportunity” mythos.

America is imperfect however, and even as great a country as you could hope to find, there are problems. Vladamir has trouble getting work in his chosen field of music, his romantic life falls apart, bad news from his old home sends him into a funk and then the great indignity of street crime discourages him even more. These moments of demoralization are the set up for the warmest scene in the film. A moment in which the dream that is America can restore our faith. A coffee shop in NY might not seem like the place for a heart inspiring moment of patriotism, but it works. A cynic might see the moment as manipulative, but a sentimentalist like me will treasure that moment and feel their heart swell with happiness, hope and pride. I live for emotional moments in film and I don’t object to those moments being inspiring.

13 thoughts on “Moscow on the Hudson”