Our science fiction movie opens with an ominous musical cue and a shot of an ice cave, in light and shadow with the blue tint of the ice popping out dramatically. A helicopter appears and lands to pick up something found in the ice. It is a large block of ice that is then transported to a remote, arctic station, inhabited by scientists.  You could easily infer from this description that you are watching “John Carpenter’s The Thing”. Let’s face it, that is very close to the set up of the action in the earlier movie. This movie however has no real horror elements to it, a much more plausible scientific premise and a cast that includes a lot of fine actors but none as great as Kurt Russell. This movie comes two years after “The Thing” and is a serious eco-drama that has science fiction elements but really wants to comment on the world we live in today.

A largely forgotten film from 1984, “Iceman” stars Timothy Hutton and John Lone as a pair of lost souls who end up helping each other to understand themselves a little bit better.

This is a movie that I saw once in 1984 and have not visited again since. That is not a knock on it, but it does not have a high repeatability factor to it. The story is straightforward, there are no surprise plot twists and after the original revival sequence, there is no science fiction element to the movie at all. What we have is a drama about the culture we live in and the choices we are faced with. The movie has some anthropology points to make, but they are barely developed. There is a morality tale involved with looking at a person as an individual or a potential product, but that mostly is used to give the secondary characters some reason to be part of the story. There are a half dozen places where the movie stretches credulity so much that it feels a little lazy. Still the movie has a couple of very effective things going for it.

One satisfying element is the whole opening sequence involving the resurrection of the “Iceman”. The team believes they have a man from maybe 40,000 years in the past, encased in ice. No one was trying to revive him, they were preparing to dissect him. The anthropologist played by Hutton objects because he thinks the whole body will be more useful to him intact. The rest of the scientists, lead by Lindsay Crouse and David Strathairn are interested in the cryogenic data that the preserved body represents. When brain activity is discovered, the medical process takes over and there is a very believable science fiction resurrection of a neanderthal man. Of course a man frozen in time for 40,000 years man find it a bit disconcerting to wake up to faces masked in medical garb in an operating room filled with artificial lights, machines that go beep and   mysterious people shouting at each other. The anthropologist steps forward, pulls off his mask and shows his bearded face, resembling much more a being the “Iceman” might recognize as someone like himself.

The decision is made to house the neanderthal man in a vivarium being used to study bears and other animals in this arctic region. After a couple of days adjusting to the water and plants and animals he encounters, the “Iceman” discovers a piece of technology that ends up revealing the advanced nature of his cage. This is one of the places where the film loses some authority because the hose the man finds and follows to a spigot, while definitely a clue to the outside world, is not as big a clue as the stairwell, the handrail, the metal cylinder that is the source of the waterfall, and a couple of other things that are right out in the open. 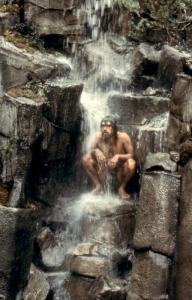 I can understand the desire to make the man somewhat intelligent by following the hose and being startled by a sprinkler head, but the fact that he ignored all those other, non-hidden clues makes him less responsive as a result. We know that we are dealing with a primitive, but we have seen him hunt in a clever way and follow a hose that he pulled up from under rock and foliage, and now we are supposed to believe the other things in the vivarium were not obvious to him? That is just sloppy story telling. The set however is very nicely put together and it looks like it could actually be a research location with a moderate temperature and near jungle like conditions in the middle of the frozen north. So except for the short cut in making the story dramatic, the art direction here is really very fine. In fact the whole research station looks like a better kept version of the station in the Antarctic that Macreedy and company occupied.

Once the man has become aware of his surroundings, another decision is made. This time Shepard, the Timothy Hutton character, is going to interact directly with the man. His anthropologist has made mistakes before but it is clear he has the best interest of the neanderthal man at heart. For the next segments, there is an extensive bonding process, that is sometimes funny, frightening in a couple of spots, and surprisingly touching despite the  near  Tarzan like verbal by play between the two men. The iceman indicates his name, but it is close enough to “Charlie” that this is what Shepard calls him. He and Charlie begin to try and understand each other, along with the assistance of a linguist flown in to help this process. 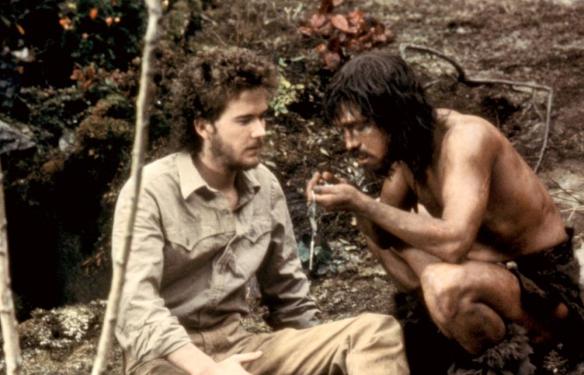 None of this would work without the other great strength of the movie and that is the performance of John Lone as “charlie”. Best known as the adult version of the Emperor in the Academy Award winning Best Picture “The Last Emperor”, he has played a succession of evil villains in American and Chinese films ever since. This is his greatest achievement. He plays the thawed out man as a real person from that age who might have suddenly found himself in this incredibly unfamiliar place. His actions are mostly physical, his eyes are very expressive, and the make up is strong enough to indicate a being from another time but subtle enough that the actors face can convey feelings of joy, fear, regret and hope. This is accomplished with a minimum of dialogue and none of that dialogue is ever turned into sentences. This was an element the script stayed true to.

After a setback in their communication, Shepard decides that a woman figure might prompt some additional trust. He coaxes Crouse’s character into the enclosure and begins again. It does restart the relationship but with some comical and sad implications. 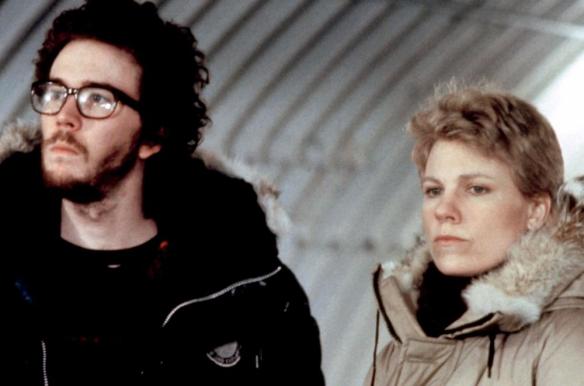 The interactions between Hutton, Crouse and Lone are juxtaposed with scenes of the riggers, roustabouts and scientists relaxing among video games, pool, and television programs. The manner in which they conduct themselves is subliminally being criticized by the more honest and simple contact that the scientist and neanderthal are engaging in.

all the care that has been taken to avoid an unfortunate turn of events. Charlie finds his way into the rest of the complex. And in another credibility undermining segment, goes undetected for a substantial amount of time. The dozens of background people we saw in earlier scenes have virtually disappeared and Charlie has free run of the complex, long enough to get into trouble and discover a way to the outdoors. The symbolic vision of a helicopter returns to prompt his belief in a godlike figure that is punishing him for failing to save his people. At least that is what Shepard surmises after a series of encounters with the flying vision. It is unfortunate that the medical team can revive a 40,000 year old man but cannot handle a punctured lung. The ensuing tragedy forces a choice about how best to resolve the “Iceman’s” dilemma.

The movie begins and ends with an Inuit proverb that is supposed to be a key to understanding the events of the picture:

To be honest, I don’t see how it is relevant but it comes up twice so someone thought it was important.

Maybe some of you have taken a “personal necessity day” or a “mental health day” off of work to enjoy some time off during the week. That is exactly what my wife did so that we could go see this in the Spring of 1984. It was a beautiful Friday in Southern California. We went to a multiplex of 8 theaters in Monrovia, that no longer exists, and we saw a late morning show. Since she worked directly across the street from where we lived at the time, we had to be discrete going in and out of the theater. I doubt her boss would have had a problem with it, but I did feel a little guilty afterwards. No such problem with the revisit, this was an Amazon Prime rental, the streaming went out twice while I watched because the network closed for some reason. Maybe I need a new router, my current one dates back to the stone age (irony intended).