The first weekend of May is now the official start of the summer movie season. Back in 1996, Twister and Mission Impossible managed to move up the crowded summer release schedule by almost three weeks. In 1984, the summer blockbusters still waited until the end of the month. Dramas and comedies dominated the box office until the big budget spectacles arrived Memorial Day weekend. “The Bounty” is a prestige piece that originated in the minds of Sir David Lean and his longtime collaborator Robert Bolt. The team that gave us “Lawrence of Arabia”, “Doctor Zhivago” and “Ryan’s Daughter” had imagined a two part film to rival those impressive predecessors. Those plans were too great for the studio that was backing the project and their film fell through, although the star cast as William Bligh stayed attached to the picture and was eventually cast in this version. 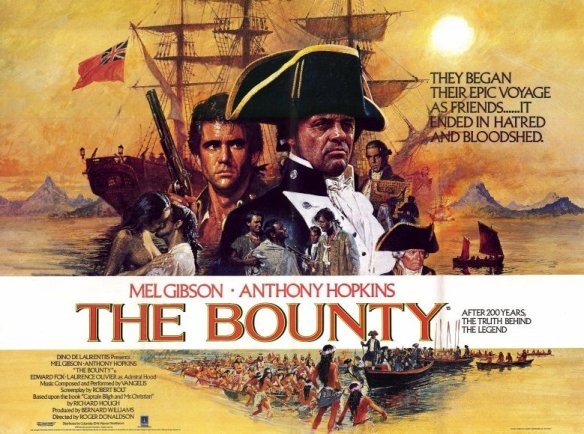 Casting is one of the attractions of this film from thirty years ago. Two future Academy Award winners are prominently featured in the movie, as were two future box office titans. It was also one of the last feature films to star the legendary Lawrence Olivier, himself an Oscar winner and a figure from the glory days of old Hollywood and British Theater. With so much going for it, there is plenty of reason to ask why it was a disappointment. It was not remembered at the end of the year and it was a flop when it comes to getting a return on investment. It is however a very effective telling of the well known mutiny story. Top billed Mel Gibson has the role of Fletcher Christian, the same part that the dashing Clark Gable had portrayed fifty years earlier. Gibson was just two years past his breakthrough at the commercial level with “Mad Max 2”, better known here in the U.S. as “The Road Warrior”.  Three years later he would star in the first “Lethal Weapon” and would become a box office powerhouse for the next fifteen years. The biggest surprise in this movie is how much he is in the background for the first half of the film. After his character is introduced, he blends in with all the other sailors on board until the scenes set in Tahiti. Once the Bounty makes her way to the island, Christian moves into the spotlight with a romance, and a more open status as Bligh’s antagonist. 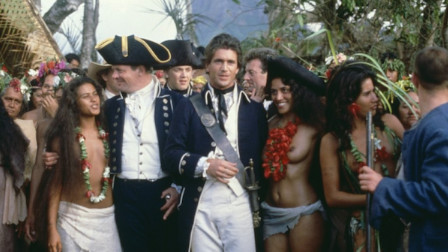 The first half of the film belongs to Lt. William Bligh, the mercurial master of The Bounty who dreams of the glory that circumnavigating the globe will bring him in the 1787 British Navy. Anthony Hopkins had been slated to play this part as early as 1975, when he would have been nearly the same age as Bligh had been at the time of these events. Nine years later though, he is a more accomplished actor with some stronger leading man credits behind him, so he seems a surer bet at this point. Both he and Gibson are prone in the later sections of the movie to shout their lines and strain their voices in near hysterical delivery.  The mutiny scenes are chaotic and emotional and filled with potential violence.  Both actors acquit themselves well here but it did seem  a bit over throttled.

You can see the idea behind a second film as we are escorted through a series of events that take place after the mutiny. Christian faces a crew of malcontents that he has stirred into a hornet’s nest and now must somehow manage to command. Bligh accomplishes one of the greatest feats of seamanship in all history, managing to get those who remained loyal to him, 3000 miles across a desolate sea, in an open boat with nearly no provisions. Both plot-lines would have benefited from more time to develop and the tension could have been higher as a result.  The trial that frames the movie is all about Bligh, since the mutineers are not at hand to be strung up from the highest yardarm in the fleet.

Visually the film is really stunning. There is no CGI and actual locations and real sailing vessels were used to bring the story to life. The original attempt to bring The Bounty around Cape Horn failed in the face of ferocious storms. The tight quarters on the ship, and the desperate fight against nature is a great sequence that shows how Bligh can be blinded by his dream. In these contexts you can see the resentment building against the ships master, even though he had some progressive ideas and seemed a thoughtful man, capable of acknowledging his faults. Hopkins is more controlled in the first half of the story, but after arrival in the islands, the captain seems to be psychologically bested by his friend Fletcher Christian. The youthful sexual dalliance with the daughter of the native king, is open and in the spirit of the place. Bligh tries to remain indifferent to the nudity of the native women and the liberating sexual attitudes of the crew. As his ability to depend on them as seamen comes into question, he begins to fray at the edges.  This is the root of the totalitarian attitude that goes from professional discipline to brutal cruelty.

Gibson’s character still tries to play peacekeeper but Bligh has lost all faith in his friendship and in an effort to maintain control squeezes tighter which causes more power to slip away.

Bligh becomes the martinet that the crew believes he is. Motivated by a regret over the woman and unborn child he has been forced to abandon, and the justifiable fear that the crew has of a repeat encounter with the stormy oceans around Cape Horn, Christian is driven to the actions he takes in a pretty clear way. It is still a dramatic mistake but it has become inevitable at this point. It is all he can do to keep the captain from being killed by the rest of the crew, and in fact he is sorely tempted by Bligh’s attitude still to do the deed himself. Whether it was duty or friendship, Christian is determined not to see the captain killed and there is a tense sequence that shows how the exile of the captain and others into a longboat is accomplished. 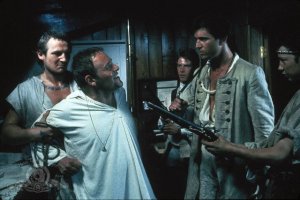 Gibson’s histrionics are understandable yet they seem a bit self conscious. The lead up to the mutiny is loaded down with sweaty facial close ups of Hopkins as he confronts the circumstances leading up to the rebellion and as he tries to sleep with the visions of sloth that the crew has fallen into in their time in Tahiti. One of the reasons that the movie does not pop off the screen as an adventure are these portentous moments filled with dreary synthesized music from the score. Vangelis, who had won the Academy Award for “Chariots of Fire” in 1981 and composed the music for “Blade Runner” in  1982, seems ill used in this film. There are no soaring horns or shanty violin music (except as presented on screen by an actor). This is an aural wall of electronic Gothic pop that ill fits the temperament of the story. The only notes that worked were the sustained low rumblings before the Studio credits even show up. The score makes the movie feel even slower than it is, and instead of heroic and villainous themes, we are treated to nondescript melody impaired electronica.

You may notice in the picture above, a familiar face from today’s box office. Liam Neeson has a significant role as the surly crewman Charles Churchill. He is one of the crew who deserts before the ship leaves Tahiti but returns and is punished so gladly participates in the proceedings. Early on his character is a glowering menace who the audience can tell will be a trouble maker. Thirty years later, he continues to play sour faced heroes and deadly earnest bad guys in movies.  He has already had three films released this year with a fourth due up at the end of this month. 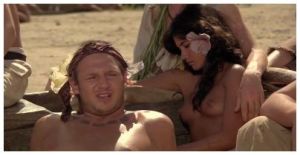 As a malcontent in the crew of the Bounty, he leads the group that would like to string up Bligh and must be contained by Gibson’s Fletcher Christian. Ten years later they would face off again in dueling movies about Scottish heroes. Gibson’s “Braveheart” is well remembered but the Neeson starring “Rob Roy” has many admirers as well.

Third billed is a young English actor, another year away from his breakout roles in “My Beautiful Launderette” and “A Room with a View”. The only man to win the Best Actor acting award three times, Daniel Day-Lewis. On the Bounty he starts off as the second in command, but after disdaining the decisions made by the captain, he is replaced by Gibson. The priggish Mr. Fryer is almost as disliked as the captain, in spite of his relative professionalism. Day-Lewis makes Fryer unlikable as a holier than thou second and a second guessing third. 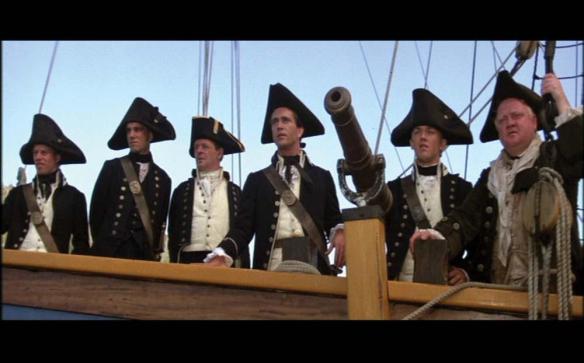 Fans of “The Lord of the Rings” films, will find a young Bernard Hill portraying William Cole, the ship’s loyal chief. Theoden looks younger but not by much, and he has a nice scene of desperation as part of the crew that is set adrift with Bligh. Everything about this movie seemed to underline that it was a “BIG” film, but it made almost no impact and probably is unfamiliar to anyone under forty, since it lacks the glowing credentials of awards or box office success. Never the less it is a handsome film with fine actors that is another jewel in the crown of this great year of movies.

In a couple of months, I will be discussing the development of the PG-13 rating during this year. Had it existed at the time this film would have merited such a designation. As it is, in spite of the substantial nudity, sexual themes and brutal scenes of violence on occasion, this film is rated PG, and like “Jaws” before it, it serves to illustrate how our values have shifted a little. In those days a PG movie was something that parents would be hesitant to take their children to. Thirty years on, PG is the rating that Disney films are designated with if they are not cartoons, and sometimes even then.

5 thoughts on “The Bounty”