Some movies need a story to carry them, some need a star, others require special effects artists to make the movie worthwhile. “Streets of Fire” doesn’t really have any of those things but it does have the vision and willpower of it’s Director, Walter Hill. After the success of “48 Hours” he was bankable, in demand, and he had a vision. His dream was a Rock and Roll fable that included all of those things a movie lover might like to see in a story, flash, neon, explosions, weird characters, gunplay and rain on the asphalt. This movie gives it to us in spades and never tries to be more important than it is. 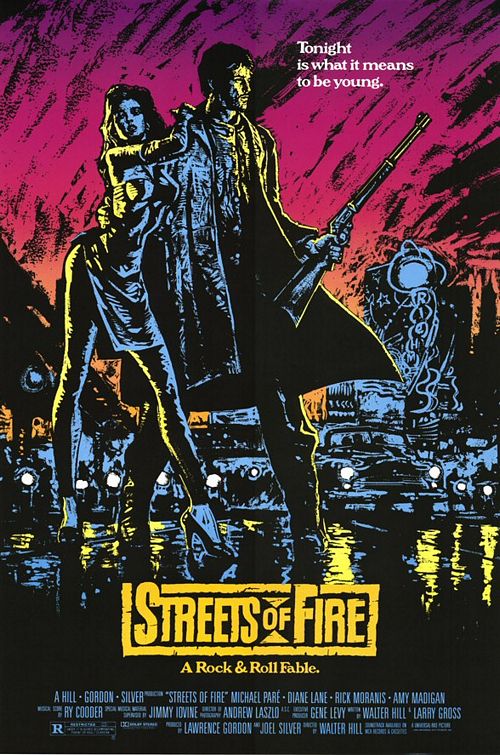 This movie screams “1980s”. The bright colors, and wall to wall soundtrack along with the high concept are all indicators of the extravagances of of that decade. “Streets of Fire”  is a license to geek out on the kinds of cinematic visuals and aural richness that make us love movies. It’s not a great film, but its a great film to watch.

The title derives from a Bruce Springsteen song, but when the Boss learned that the plan was to have someone else cover it, he withdrew permission to use the song in the movie. As it turns out, that’s not a big deal because sitting in the bullpen was the master of rock opera excess, Mr. Jim Steinman. Steinman was one half of the “Meatloaf” project as the artist was once promoted as. He was the invisible part, the composer of the pop arias that made “Bat out of Hell” one of the biggest selling albums of all time. Earlier in this same year, Steinman composed the song “Holding Out for a Hero” for the “Footloose” soundtrack. There is nothing subtle about his work, it tends to be loud, passionate, filled with vivid metaphors and usually played at a rapid clip. The female lead character in this film is Ellen Aim, a rock singer with a dramatic stage presence who appears to be channeling Meatloaf in several of her songs. Since we are in nostalgia mode for this post more than  critical mode, I’ve decided to include several music clips to illustrate this film. Here is the one that opens the movie, it is presented over a montage of clips from the whole film, I’d warn you about spoilers but there are no surprises in the film, it plays out exactly as you would imagine.

A six minute song is used as the start of the film. As you listen to the lyrics and hear the piano riffs and guitars mixing together, you can sense the straining for over the top emotionalism. No one can mistake a Jim Steinman song for something written by another composer. Recently, “Glee” made a hit out of his thirty year old song “Total Eclipse of the Heart”.

So let’s take a look at some of the visual tropes that fill this movie across the entire width of the screen. The hero is Tom Cody (a moody but handsome Michael Pare), a loner who was the former lover of the damsel in distress. He is called into action to retrieve the kidnapped princess by his sister, who is the audiences stand in for the values of love and justice. Cody arrives back in his home district via elevated train. Like any hero returning home however, he is alone. 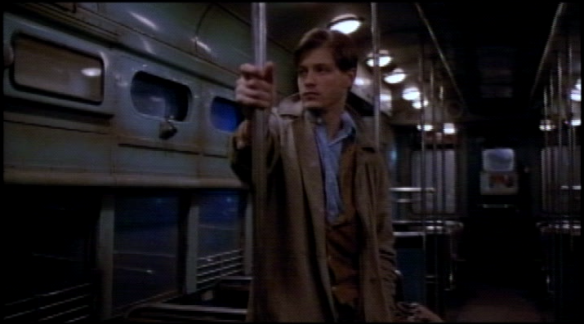 The only rider on the train, arriving at night. There are no ads, graffiti or other pesky passengers to distract us from our focus on “The Man”. He is no sissy, sitting down for a long train ride, no, he stands and ignores all of the empty seats around him so that he can see what is coming and be the center of the story.

The Damsel in Distress is Ellen Aim, played by Diane Lane. She is the rock star that everyone loves and worships at the start of the film. Her tough exterior hides her vulnerability and she further cloaks those feelings by clothing herself as an aggressive sexual predator on stage.

She poses on stage in dramatic stances. Her aggressiveness is indicated by the violent and rhythmic fist-pumping she uses to accompany the music and urge the audience on to greater frenzy. When she sings a slower song, the hands clasp the microphone in a suggestive manner and she is all curled up cat waiting to be stroked. In other words she is every adolescent males fantasy of what a woman rock singer should be. No wonder she stirs the loins of the villain Raven, who crashes her concert and along with his malevolent band of bikers, kidnaps her right off stage in front of the impotent audience. That impotence is represented by a minor character named Clyde, a bartender and former friend of our hero. In one of the early indicators that his career was destined to feature parts as feckless characters, Bill Paxton gets brushed aside in this sequence. He later gets beat up by a girl of all people.

The Villain is played by Willem Dafoe in his breakout role. There is nothing deep about the bad guy, we don’t get any background or explanation, we just know he is evil by what he does but most especially by how he looks.

Dafoe’s pale face and deep wide eyes fit the stereotype of a maniac. The fact that he has played a number of bad guys since this has come out suggests that he was pretty well cast. Another way to tell he is the evil character in the story is to look at his wardrobe. Black is the only color choice for wrongdoers and everything this guy wears is in fact black. That includes the strangest high waisted pair of overalls you have ever seen. 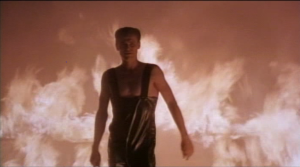 I don’t know what kind of job requires vinyl waders, but it looks pretty ominous as you walk around your lair and then stroll out of the flames to confront the hero. Clearly you are not a guy to be trusted. I know he played Jesus Christ in the Scorsese film but he was also Bobby Peru in “Wild at Heart” and Jopling in  “The Grand Budapest Hotel”. All of these roles exploit his otherworldly looks but this film defined his character simply with those images.

Cody ends up with a sidekick, former soldier and now drifter McCoy. In an early nod to a upcoming trend, the sidekick is played by a woman. To make sure she is not a threat to the romantic interest with Ellen, the sidekick is a not a hot model type but a butched up Amy Madigan. We are given several indicators that she is a lesbian, although no one comes right out and says it like they would today. Ellen’s current boyfriend and manager is Billy Fish. A loudmouth stereotype that if he was made Jewish, would have brought the anti-defamation league down on the production because the character is so consciously obnoxious.  The nebbish Rick Moranis is much better cast in the other movie that featured him the following week, “Ghostbusters”.

Many of the actors in this film are featured in other films for this project. Diane Lane will be in “The Cotton Club”, Michael Pare stars in “The Philadelphia Experiment”, Bill Paxton gives his clothes to Arnold in “The Terminator” and Amy Madigan will turn up in “Places in the Heart”.

The movie though is all about style, not really the actors, except in how they fit that style. The movie is loaded with songs and MTV influences the frequent use of video clips in the background. There are even video jukeboxes in the movie, which may be set in the past, the present or the future, depending on what you are looking at at the time.

There are 80’s styles and 50s retro throughout the movie. Reva uses a type writer like device that sends a telegram to Tom. The gangs dress in motorcycle gear that could fit into any time period but the band at Torchie’s , the hideout of the gang, is played by “The Blasters” an 80’s punk style band that played 50s styled music. The score is by Ry Cooder, who did most of Walter Hill’s films. It is blues inflected soul music with Cajun overtones. Along with the Steinman tunes, there is a terrific R & B piece by Dan Hartman that became a top ten hit. It is performed by the Sorels, the group that Tom and his partners hijack in the film.

Everything about this movie can be summarized by looking at the following picture. 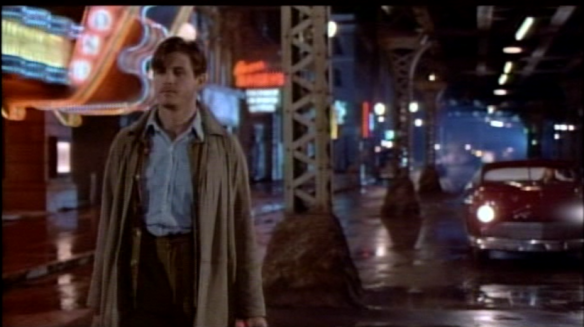 The cars are cool, the hero is tough, the streets are wet and the neon reflects off of everything. The vision of the movie is perfectly realized even if it does not always make sense. But why bother making sense when you can make a movie that shows a passionate kiss in the rain, a storm that comes out of no where and lasts just long enough for our main couple to embrace in?

This is the kind of movie where motorcycles and cars explode when they are hit by gunshots; where the bad guy shows up with Gandy hammers to battle the hero in front of opposing sides armed to the teeth that have come out of no where, where everyone is dressed to the nines just to eat breakfast in a diner, and everybody speaks in stylized tones that harken to movies of the fifties. It was a flop that killed off the hopes for a planned trilogy of Tom Cody films but it preserves some of the great excesses of the 80s for all to see. I highly recommend the experience.

7 thoughts on “Streets of Fire”