Having recently dismissed another sex comedy that came in the same package as this, I was pleased to find that my memory was correct. “Revenge of the Nerds” is a far superior movie to “Bachelor Party“, and it has a cast of young stars that while they never set the world on fire, continued to work in films and television, making a greater impact than any of Tom Hanks buddies from that monstrosity. 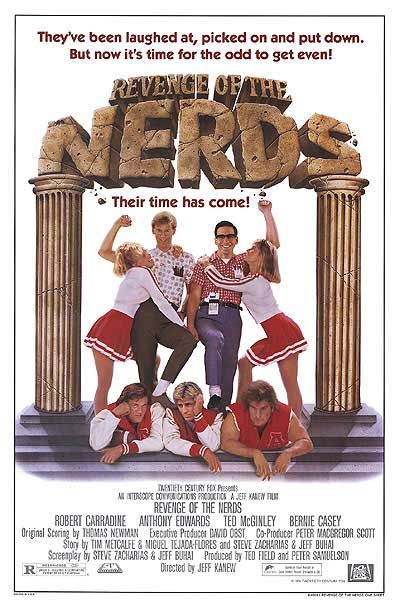 While college fraternity comedies had certainly existed before this film, it is still the template for many fraternity underdog stories. “Monster’s University” should have paid a licensing fee to the creators of “Revenge of the Nerds”.  This is a nice story of friendship and acceptance. It has some titillation and a few awkward stereotypes, but in the long haul it means well and it mostly succeeds.  Gilbert and Lewis 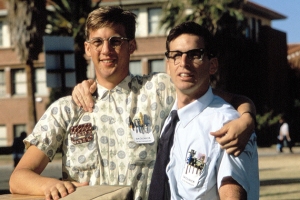 are two smart but awkward kids, headed out to college and looking forward to the college experience. They want their dorm room to be cool, they want to meet girls, and they want to fit in. The problem is that the jocks on campus are not interested in letting any “nerds” get comfortable in their territory. When the reckless jerks at the Alpha Beta fraternity burn down their own house, the freshmen get displaced and the solution to their housing situation is to create their own fraternity. Rivalry ensues and the battle between the jocks and the nerds is on.

The theme of the outsiders trying to gain acceptance is an old one and it is nicely realized here. The “Nerds” are not bad kids, just different and socially awkward and not traditionally attractive. The film makers go a long way to making the guys (and the girls of the similarly on the outs Omega Mu sorority) look unkempt, lumpish and a bit off center for most of the film. Lewis never shirks from an opportunity to be friendly toward the sorority girls he’d like to connect with, he does not seem to recognize that they will see him as an untouchable until much later.

Gilbert is a bit more cautious, and he manages to find someone that shares interests with him and that he thinks is great. She is his female counterpart and grounds the story in a little bit more reality. One of the difficulties that come along with a story like this is to make it believable. The nerds are the most real characters in the movie. They have quirks and faults but they always seem to act like real people would. The tough job is selling the bad guys, the jock fraternity. This story is no exception. The Alpha Betas are not  quite the mustache twirling villains of “Animal House” Omega frat, but they are certainly single minded and stupid.

The competition between the two houses becomes the focus of a carnival tournament that will determine who controls the Greek council in the next year. Having found that they are shut out of access to justice as long as the ABs have power, the nerds of Tri-Lam, decide that the best way to fight fire is with fire. That sometimes allows some unfortunate racial humor and some mild gay jokes to become part of the story.  One of the slightly awkward stereotypes that crops up is that of the intoxicated Asian man. Even though the nerds have

a drug that counter acts the effects of alcohol, so the beer swigging tricycle race should minimize that image, it still comes across a lot less politically correct than would be acceptable today. Toshiro Takashi  is more nerd than Japanese caricature, but it is close to Long Duc Dong territory at times.

The fantasy of every tech geek is realized when under the cover of the panty raid, the nerds have put cameras in the Pi house to spy on the Sorority sisters. In 1984, this was a fantasy type revenge that probably seemed fairly innocuous. Today with the range of social media and perversion out there, it would be a felony and I’m not sure if we would laugh as hard. Alth

ough if Robert Carradine’s infectious horse like laugh was there to prompt us, we might still see it as just being a prank. The joke they play on the jocks is a long time rumored prank as well, only I used to hear it with Nair rather than Icy Hot. Most of the movie is spirited hijinks but there are some social points to be made. I’m not sure that the Lambda, Lambda, Lambda fraternity is depicted fairly, although in the end they are shown heroically standing up for their brothers. The all white jocks back down when confronted by the black fraternity brothers of the nerds and that seems a bit dodgy as well, as if we should all fear the power of the black man.

The strangest outcome occurs when Lewis uses subterfuge to w

oo the Pi of his dreams. He must in fact be pretty damn good at what he was doing to be given a pass for that. Oh, and for putting her nude picture at the bottom of all the charity pies that they sold at the carnival. Imagine if your new boyfriend was responsible for every guy on campus licking a naked picture of you. That does not sound very romantic to me, but this is a comedy fantasy so I guess we’ll just bypass that speed bump.

When the jock rally the night before Homecoming becomes the focal point of the confrontation between the Nerds and the Alpha Betas, Gilbert is determined to wrest the microphone from the boneheaded football coach played by a very young and slim John Goodman. It has become a standard episode to have a moment of honesty in front of a big crowd. It is often followed up by the hoary trope of the slow clap. Here the Nerds simply point out that the vast majority of the school and the alumni are more like they are than the jocks. If people think that bullying has been ignored too long, just remember that this movie is thirty years old and the issues that a lot of kids face today have been around a long time. Those attitudes have also been criticized for a long while as well.

The Nerds dare to be different and revel in those differences. This movie spawned several sequels that I have never seen and an attempt at a television series. I can’t say for sure that those also promoted a positive vision for the outsiders, but I can’t imagine that they would have any appeal if that “us against them” vibe was absent.

In the end, everyone is made to feel a little bit more valued and the good guys win. So with this film you get a college comedy, with mild sex themes, a positive value system, and some characters that you actually care about as opposed to merely watch. It’s a pretty good formula for a successful entry in this project. If you have not seen “Revenge of the Nerds” yet, take some time and watch it. I think you will come away moved by the spirit of the film. Just Like Arnold Poindexter here.

4 thoughts on “Revenge of the Nerds”