This year has produced some weird movies by this point. “Repo Man“, “The Adventures of Buckaroo Banzai“, “Electric Dreams” are all examples of the odd sensibilities that could come up in the year. Cultural touchstones like “Ghostbusters” or “Indiana Jones and the Temple of Doom” seem to litter the year as well. Small, independent films show up to play on the field as well. Taking a cue from the off beat and independent minded directors like John Sayles and Alex Cox, former Robert Altman protege Alan Rudolph supplies an odd little love story in the form of a comedy/drama with an interesting cast, sexual politics, and enough ambiguity to satisfy cineastes of the intellectual variety. 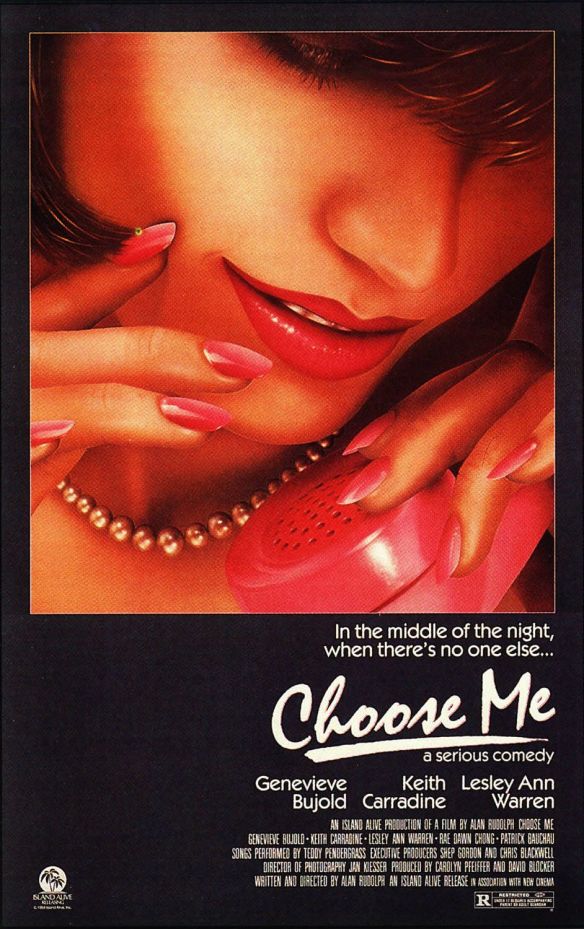 “Choose Me” starts off like a music video. There is a sensual Teddy Pendergrass vocal of a Luther Vandross penned song. A bright neon sign lights a dark skid row street, and couples engaged in romance filter out of bar. As they move into the street, partners switch and the ladies of the evening sway in rhythm with the dance moves of a gentleman who takes their hand. Most of the customers are black, but a well dressed white woman strolls comfortably though the doors of “Eve’s Bar”.  This film is an exercise in style, but only partially is it visual style that it is pushing. The tone is one of overwhelming loneliness and longing. The characters are interesting but maybe a little too off for us to find believable. There is some violence and sexuality, but none of it is explicit and most of the really tough moments involve the things the characters say about themselves.

Lesley Anne Warren plays Eve. She owns the bar and was once one of the girls outside on the streets. She is involved with a married man and she is unsure of the direction she wants that relationship to take. Once upon a time, the radio bands were filled with talk shows hosted by psychologists who would offer advise (Remember Frasier?). Eve calls the most popular radio psychologist in L.A. , Dr. Nancy Love, for some insight. This is the point where I will be inserting a Kiss related joke when I think of it later. Anyway, “Dr.Love” is portrayed by Geneviève Bujold. This is her second film in a row as a psychologist dealing with sexual issues. Just last month she appeared in the Clint Eastwood vehicle “Tightrope“, giving him advice and fulfilling the damsel in distress role in that film. In this film, her advise is mannered, well chosen and bloodlessly professional. She has the ability to see others needs but, in a not that unusual twist, has difficulty in her own life. She has a shrink that she consults for the most part on the phone. 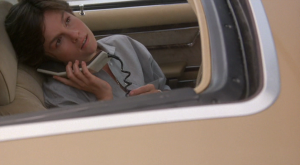 We never get to see him and all of her calls to him end up with her hanging up on his advise to come in and talk to him. Despite her success (she has a phone in her car in 1984), she can’t really connect to anyone on an individual level. In a coincidence that can only happen in the movies, Dr. Nancy Love, who passes herself off to others as Anne, a phone answering service operator, becomes room mates with Eve. It seems the psychologist likes to observe the relations of others so she moves regularly. It just happens that the woman she is moving in with is a regular caller to her show.

This story is going to involve a love triangle, so there is in fact a third major character. Mickey is released from a mental institution because the only thing the doctors can find wrong with him is that he makes up stories. He may be a pathological liar, but the pathology does not seem to be evil, it runs more along the lines of delusional. As he meets others in the story he says he has been married before, twice, and also that he has never been married. He claims to be a photographer, and a former jet pilot. He has the skills of a mechanic and he seems to he an avid gambler as well. His devil may care smile and mysterious narrative make him attractive to women but he is not an indiscriminate Lothario. When one woman throws herself at him, he casually ignores her offer to come home with her and instead sleeps overnight in a bus station.

Keith Carradine is Mickey, and he was a regular in Altman films of the 1970s. He is also the Academy award winning singer/writer of “I’m Easy” from “Nashville” an Altman film.  He has continued to work up through the present time in a variety of character parts. He was an intrepid FBI investigator in “Dexter” and this last season on the TV adaption of “Fargo” he played a cagey former cop who has one of the best scenes on Television in the last five years, matching wits in a diner with Billy Bob Thorton. His acting chops are solid as evidenced by his ability to play this particular part. Is he a lovelorn lost soul, or a sexual manipulator, or a dangerous man? That he is able to keep us guessing at this is a testament to his skill as well as to the clever writing of this character.

There are other players in the story. Rae Dawn Chong, daughter of Tommy and with a brief part in “Cheech and Chong’s Corsican Brothers“, is an abandoned young wife. It is her husband that Eve is seeing, and she haunts the bar in hopes of both drowning her pain and trying to understand the rejection she feels. She flings herself at Mickey without much hope but does get him into a poker game that will set up several confrontations later in the movie. John Larroquette makes his second appearance on this year’s movie hit parade. After showing up as the loyal but incompetent Klingon second in command in “Star Trek: The Search for Spock”, he is a lot more recognizable as a smitten bartender who desperately wants Eve to be his.

Warren’s Eve begins to warm up to the idea of Mickey, at about the same time that Mickey finds Anne/Nancy to be a woman with a broken wing. He ends up at the house the two share and Anne/Nancy discovers the truth about him while also revealing the truth about herself. There is a great sequence at the breakfast table where Anne describes the Dr. Love show, and engages in the oddest third person description of herself that is possible.

It is in this scene that we get to see how deeply dissatisfied Dr, Love is with her life. She reveals through the thoughts of Anne about the Dr, she is describing, the burden she carries trying to help others and the difficulty she has being a complete human being.  Mickey woos her the way he has Eve, with a kiss and an invitation to marry him. He is off center as much as she is, but instead of keeping it inside,  like the two women do, he hides his problems in plain sight.

Nancy Love has had a breakthrough. It turns out that the first step of the cure is, a Kiss (OK, I put the joke here instead of above, sue me). When she returns to the radio program that night, she has a nearly orgasmic episode giving out her advice. Even though there will be some uncomfortable conversation between she and Eve in their room mate situation, her advice to Eve in her radio persona is enthusiastic and warm. Some loose ends are still dangling at the conclusion of the movie but we have a good sense that the three main characters have at least taken a step toward healing themselves and each other.

In an odd salute to “The Graduate” two characters end up riding at the back of a bus with initially enthusiastic attitudes. As the time moves forward and they sit quietly, there are some uncomfortable side long glances and facial expressions that ask the question, “Have I done something completely crazy?”  The answer is yes, but anticipating the  consequences will give you a nice laugh as you put the film out of your mind.

During the project, I have rented films on line, watched bootlegs on You Tube, and purchased DVDs and Blu ray discs to be able to see the movies. I had several of the films in my collection to start with and a couple of them I watched on my old Laser Disc format. For this movie, I’d have had to fork over a pretty stiff price to get it on DVD. A new copy was more than Thirty dollars, a used copy would have been at least eight plus shipping. However, when I went searching on ebay, I found a Laser Copy for less than five bucks and since this is a nostalgia based project, I “Chose That” to watch this on. 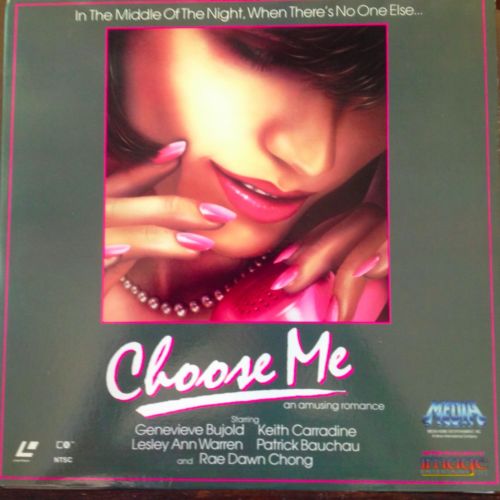 1 thought on “Choose Me”