Within just a couple of weeks in late September, three of the films nominated for Best Picture were released. Now such a concentration might not seem odd these days, except that all the films would be coming out two months later in November and December. Remember, films played in theaters longer in 1984, and it was less likely that a movie would be forgotten just a few months later. “A Soldier’s Story” premiered at the Toronto Film Festival in 1984, and was one of the earliest films to benefit from that exposure.

Presented as a murder mystery, the real subject of the film is racism. The kind of racism that most people would be familiar with, White and Black is part of the story but not the whole story. It also deals with a form of Black on Black racism, which involves attempting to shed a negative image by shrouding those negatives on someone different from ourselves. It does have the patina of a “prestige” picture that deals with white guilt over racism, and that may account for it being, maybe not forgotten but overlooked.

The cast is a “Who’s Who” of young black actors; Robert Townsend, David Alan Grier, Art Evans,William Allen Young, Denzel Washington, Howard Rollins and Adolph Caesar are all featured in the movie. Denzel of course will be the biggest star in the group, but others are very well served by their parts. There are a few white actors in the film also, but they are background players for the most part. The play that this film is based on was “Originally produced on Stage by the Negro Ensemble Company Inc”, according to the closing credits, and many of the actors came from that production. The featured performance by Adolph Caesar was honed by him on stage and Director Norman Jewison never considered anyone else for the part.

Sergeant Vernon Waters is a spit and polish non-commissioned officer, serving in the U.S Army in 1944. He was one of the black soldiers that fought in “The Great War” and then stayed to make a career in the military. Now he oversees a band of black soldiers, many from the Negro Baseball leagues, who represent the the command as a baseball team, playing in games against other units and local minor league teams. All of the soldiers resent that they are not in the war proper. The segregation of the military has kept them out for the time being. The military base they are stationed at is in Louisiana according to the titles, but I have heard the setting revered to as Mississippi in several places. Waters is a very conflicted man, he is proud of his status in the Army and he hates the rules that keep it segregated. He wants his race to be standing at the front when everyone is counted for doing their duty, but he despises members of his race that he feels bring them down. He respects the orders of his superiors but resents that white men are the only ones giving those orders. Finally, he can be friendly and act as a comrade, but also he has a mean streak and is a son of a bitch when the wrong button is pushed.

No spoiler here, Sergeant Waters is killed, and the investigation into his murder represents a huge problem for the military. Suspicion falls on the Klan early on. A black man, in the army uniform, with a Sergeant’s stripes, walking around the deep south in 1944, might very well be the victim of a race based murder. The investigation by the local military is brief, but the Army sends in a lawyer from Washington D.C., to conduct a further inquiry. That Army Captain is a black man, and the sight of a black commissioned officer is new to just about everyone at this time. Howard Rollins, who had been nominated for Best Supporting Actor for “Ragtime” just three years earlier, was the most recognizable actor in the film at the time.

As Captain Davenport, he is a fish out of water in the deep south and in the Army. One of the criticisms of the movie is that it replays Jewison’s own film from the 1960s, “In the Heat of the Night”, recasting Rollins in the Sidney Pointier role of a competent Northern Black, interacting in the segregated south while investigating a murder. Given the themes and the plot line, that criticism is not too far off the mark. The biggest difference is that “In the Heat of the Night” is largely a white story with a black character that the whites adjust to or fail to adjust to. “A Soldier’s Story” is clearly focused on the black experience in these circumstances. The finger pointing of guilt here is distracted by race, but in a reversal of the traditional liberal guilt, it is whites who are being accused without much proof of committing the crime.

The story structure reveals it’s secrets as the men in the Sergeant’s command are questioned about the night of the crime and their relationship with the deceased. As each man is interrogated by Davenport, a portrait of Waters comes out and it is far from flattering. In spite of his military bearing and adherence to protocol, Waters was a bully far outside the lines of any other non-commissioned officer we have seen in movies before. Two years prior, Louis Gosset Jr. won the Academy Award for best supporting actor in “An Officer and a Gentleman”, playing a hard ass drill Sergeant who has the task of turning recruits into military personnel before they can become flying officers. We know that the Sergeant can be a tough guy in movies. R. Lee Emry will be the template in a few more years in “Full Metal Jacket”. Neither of those guys go so far as to provoke an enlisted man out of racial animus.

That’s what Waters does and it leads to tragic consequences. Well liked C.J., the best player on the team and a talented singer, is one of those blacks that Waters feels is holding his race down. We learn from the other men that Waters was mostly hated, though oddly the one man who respected and even liked him was C.J..

Up until he stopped working ten years ago, Gene Hackman was my favorite actor. Ever since Hackman retired, I have to say that Denzel Washington has been the performer most likely to send me into a theater and then impress me once I am there. This was only his second film in a featured role, but you can tell immediately that he has “it”. His accent was not perfect, but he was subtle in the part he played and conveyed a thoughtfulness that other characters were missing. 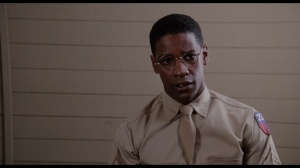 If you look at him here and in almost every other role he plays for the next thirty years, you will see the man with the best posture in Hollywood. That self confidence is one of the things that made him stand out from the rest of the talented cast of actors. His Private Peterson shares tales of Waters cruelty and self loathing and he becomes a key figure in the investigation of the crime. Art Evans, a familiar character actor from the last thirty years, at first hides some of the truth as a Sergeant busted to private by his “friend” Vernon Waters. Robert Townsend was in his second movie of the year in “A Soldier’s Story”. Having been seen as one of the singing and dancing Sorels, in “Streets of Fire“, he repeats a comic performance in this film with sly humor rather than buffoonery. William Allen Young, who works regularly on television and has appeared in several other movies has this IMDB trivia listed about him “Attended University of Southern California and has a degree in Rhetoric, Debate & Forensic Sciences.”  In one of the few cases where I can say, “I knew them when”, I can say that he was a team mate of mine on the Trojan Debate Squad. Although he did primarily Individual Events, everyone could see he was driven and talented.

As the antagonistic Private Henson, he lent color to a scene set at a Sunday service and he provided enough emotional frustration in the story to set everyone else off in just the right ways. I’ve not talked to him in thirty-five years and since there were more than forty members of the Speech team, he might not remember me, but I have watched him step very effectively into roles since our days on the TDS.

The primary performance to recognize though is the breakthrough role of Sergeant Vern Waters, as played by Adolph Caesar. He is a small man with a lot of power on screen. In several scenes in the film it is evident that the other actors tower over him, yet he is never anything less than intimidating. His fight scene with Denzel might look like he is outmatched, but his ferocious demeanor and snarling voice command our attention. 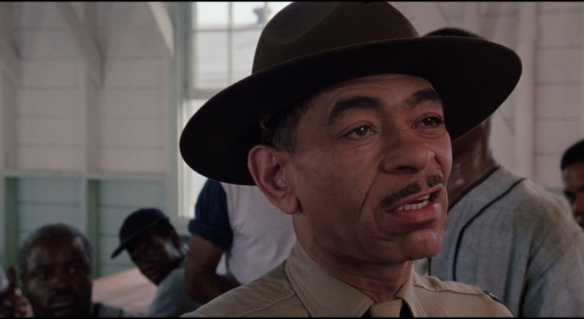 Look at the venom in that sneer on his face. He drips of antagonism and later in the film, as we hear some of his story, he spills out the self loathing that drives him. There is a chilling sequence where he reveals a long held secret to Private Wilkes (Art Evans) as they sit in the local bar, The camera looks at his face as if in the mirror behind the bar and he shares a defining moment that tragically leads to all of the unpleasantness of racism coming to the surface. Caesar was nominated for Supporting Actor for this role and he won several critics awards along the awards season trail. I remember reading in an interview, a moment of honesty that might have cost him the award. Haing S. Ngor was nominated for his role in “The Killing Fields”, and Caesar had the bad judgment to suggest that as a non-actor, Ngor was simply playing himself in a role similar to his own experiences. Criticism of another actors work during an Oscar campaign might be done surreptitiously by a studio or producer, but such a forthright comment from a fellow nominee was probably seen as being in bad taste. It may have turned off more than a few of the voting Academy members. Regardless of the Awards outcome, this is a terrific performance and it should have launched Adolph Caesar on a more lucrative career. The very next year he appeared in Steven Spielberg’s “The Color Purple”.  But one year after he lost the award on television, Caesar dropped dead on the set of “Tough Guys”, at a very young age 52.

This was a film that got attention because it was unwanted, it focused on an unpleasant subject and it featured a cast of unknowns. Yet because of it’s subject and the traditional slot that seems to be reserved for message pictures in the Academy books, it was widely hailed, made back it’s money and launched the careers of several fine actors. Whether it is clever enough or contains sufficient fireworks to justify it’s nomination that year, it does contain a great performance that will reward your viewing.

4 thoughts on “A Soldier’s Story”