I don’t know where to begin, this movie is so laughable that you could choose any scene and find things to mock. Mia Farrow appearing for about thirty seconds, Peter O’Toole hamming it up and not doing a very good job of it, Faye Dunaway, doing most of her performance under the belief that opening your eyes wider is a the only acting tool one needs for this material, any of these could qualify with a dozen other examples. I suppose I will start with the one thing they got right, casting Helen Slater as “Supergirl”. She is adorable, looks great in the costume and has an innocent quality to her that fits the idea of purity that comes in these films. 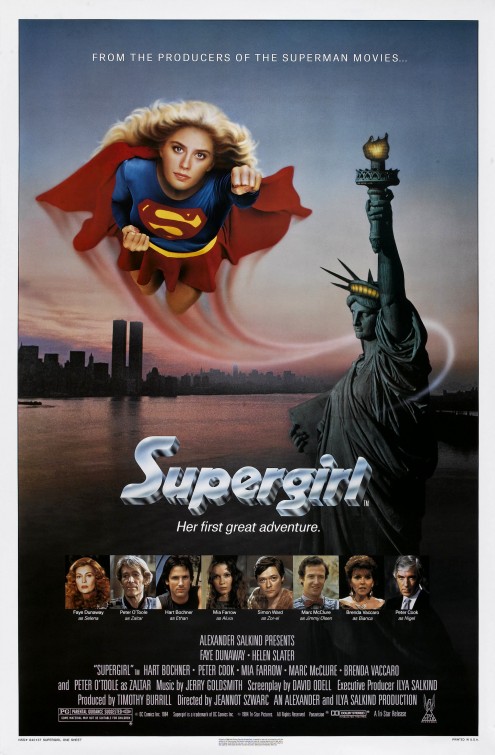 The movie comes from the original producers of the “Superman” series, and it is at this point that they wash their hands of the franchise. This is a movie that is as they used to say in the rap world “got the vapors”. It is cruising on the good will of the earlier Christopher Reeve movies. Kara only mentions that she is Clark/Supermans cousin a half dozen times. Marc McClure shows up for basically no reason other than to tie the films together. At one point they even have Kara admiring a “Superman” poster on the wall, that’s as close as they could get Christopher Reeve in this movie.

The start of this disaster is the script by David O’Dell. The start of the premise involves an orb that escapes from Argo City, the inadequately explained refuge of Kryptonians in another dimension. Zaltar, a shamefaced Peter O’Toole, is responsible and will seek the orb except that his young protege Kara beats him into the only transport that is available to Earth. The orb falls into the hands of a couple of witches, that’s right, straight out of Hogwart’s, and it for some reason accelerates their power. Faye Dunaway’s Selena has delusions of Voldemort and starts trying to control the world but first decides to create a love spell so she can control some brainless beef cake gardener she has taken a fancy to. Of course, the gardener is someone that Kara also has taken an interest in, so their paths will eventually cross.

Peter Cook plays Nigil, the second witch and the one who gets dumped when Selena gains power. He pops in and out of the story whenever it is necessary to have a plot complication that has nothing to do with the main issue but does provide Dunaway a chance to vamp some more. He becomes a source of comic relief, unfortunately, nothing very funny happens when he is on-screen. Brenda Vaccaro gets to play Otis to Selena, and she has even less to do in the movie than Cook does. The amount of talent that is wasted in this screenplay is embarrassing. Instead of giving the characters something to do or say, they mostly provide transition segments from one scene to another.

The Hogwart’s reference is not unique to the witches in the story. The first half of the film after Kara arrives on Earth plays like a PG version of Porky’s. You see Cook is a math teacher at an exclusive school for girls and that is the cover that Kara has decided to use while she is there. She gets assigned Lois Lane’s little sister as a room mate. “Mean Girls” style pranks ensue and there are shots of the girls in their dorms and shower room in their undies. So if “Supergirl’s” outfit is not sexy enough for you, there is a whole selection of girls in school uniforms to flog your fetish.

Hart Bochner is Ethan the gardener and it is only when he is spellbound wandering through the town that Kara begins to show some super powers. One of the biggest mistakes that the producers made early on was to put Richard Lester in as director for  Superman II and III. He ruins most of the dramatic drive of those stories with meandering jokes about yokels confronting beings from another world. TV director Jeannot Szwac, best know for “Jaws 2” and “Somewhere in Time”, apes Lester’s touch by having the same sorts of humor show up here. Kara kicks some jughead Lotharios in the groin and stupid Ethan wanders into a turbulent street with a runaway tractor scooper after him to deliver him to Selena. It is an embarrassingly bad  scene but at least Kara flying does get her legs in the picture.

After a few minor skirmishes with Selena and the evil she can bring with her orb enhanced witchcraft, Kara ends up in the Phantom Zone for no reason that anyone can fathom. It feels as if they made up story points as the went along. Selena cares about the guy, and then she cares about world domination and then she cares about the guy again. While Kara is gone, a mountain appears with a fortress on top of it and there are protestors to Selena’s rule. Huh? What happened, how did the town come under her domination, what does it consist of? We never see her do anything except order stupid Ethan around and capture the two friends that Kara has, using a force of police that come from nowhere. This movie gets messier and stupider as it goes along.

Kara is not alone in the Phantom Zone, Zaltar has been banished there for letting the orb get away. He finds Kara and attempts to squirt alcohol into her mouth. In fact, “Squirt” is the most comprehensible piece of dialogue he has in the film and it makes him look like an idiot when he repeats it. Why he knows the secret to escaping the Phantom Zone and why it leads back to Selena is another one of those things that just happen because the script says it does, not because it makes any sense or is related to anything else going on in the story. 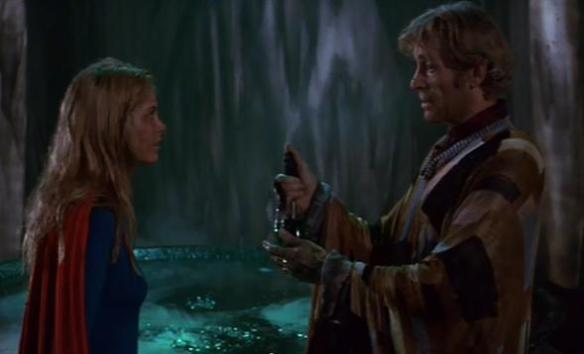 Maybe if he offered all of us a squirt we would not notice how terrible this movie really is.

The climax has Kara fighting a demon in the edge of the Phantom Zone while Selena looks on waving her magic stick and having the orb twirl. The special effects are not very persuasive. Everyone says goodby and than Kara flies to the bottom of the ocean back to Argo City. How she can fly there and why it is under water are two more mysteries of the film.

I saw this one time in 1984 and i may have seen it one more time in the late eighties, I’m not sure. I am pretty sure that I will not be seeing it again in my lifetime. The image of Kara below summarizes my feelings on this movie. 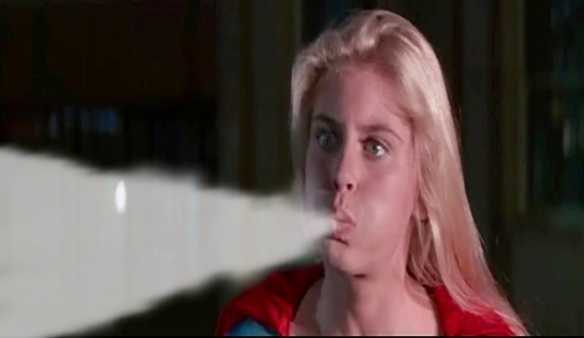