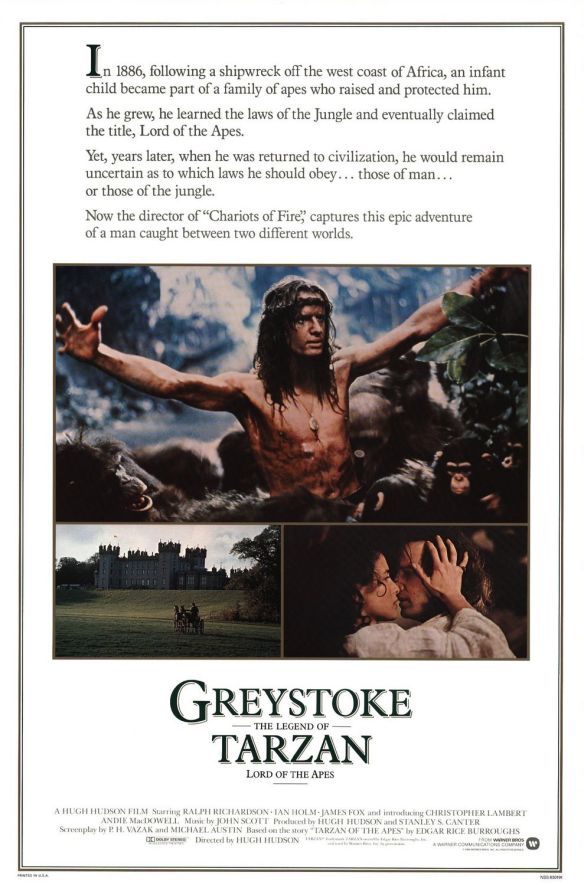 Children of the millennium must think of the Disney cartoon when they think of Tarzan. It is a character that has been somewhat dormant for the last fifty years. Every once in a while, a project creeps back into the world but just as quickly disappears. It may be that since the Second World War, Africa doesn’t seem as remote or as unexplored as it once was. I used the term “Elephant’s Graveyard” in class one day, and even the kids who know “The Lion King” seemed mystified as to what I was talking about. As a kid in the sixties, I grew up on a steady diet of Johnny Weismuller, Gordon Scott, Jock Mahoney  and Mike Henry. There were more Tarzan movies than there were James Bond films. So after more than a decade in retirement as a character on the big screen, I was especially excited to see that Tarzan would be coming back in 1984, which was for me, the most anticipated movie of that year (Yep, even more than Indiana Jones). Having read most of the original Edgar Rice Burroughs novels, I was especially interested in this version because it promised to hold true to the story as I’d seen in in my minds eye.

The Director was Hugh Hudson, who had just made a big splash with the Academy Award winning “Chariots of Fire”. The pacing and tone of the film are very similar to the earlier movie, with frequent quiet moments interrupted by bursts of violent action and always a lovely eye for the scenery and backgrounds. 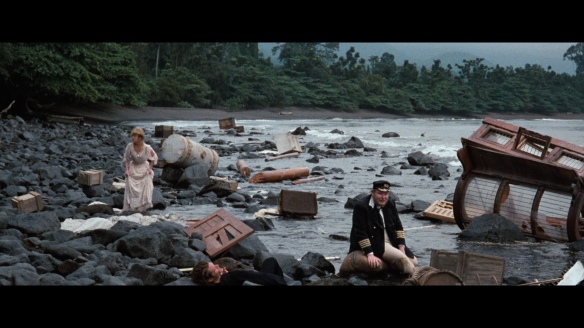 The opening ten minutes quickly sets up the story for the duration of John Clayton’s life. His noble born parents are in a ship wreck that leave them as survivors on the West coast of Africa. The captain of the ship also lives but decides to trek off in hopes of finding some help. Lady Greystoke is with child and her husband does all he can to make their encampment comfortable and safe. When she dies after childbirth the grief stricken Lord, neglects to secure their cabin and he is attacked by a giant ape who has been curious about the sounds coming from the tree house. With the Earl’s heir and his wife dead, a female ape who’s own child has died, picks up the human newborn and essentially adopts the child as her own.

This whole sequence is dramatically visualized and the apes are not CGI creations but rather the most believable mixture of costuming and make-up that you are ever likely to see. The actors have practiced walking and moving and acting like these giant creatures so well that you might think they really were trained apes from a studio zoo. This entire early section is visualized exactly how I’d seen in in my head. While we don’t see the ship actually going down, the way it was introduced still leaves a dramatic impression. There are some scenes of ape life before they encounter the humans and we get a chance to see the social hierarchy of the troop. There is a male companion to the female who has adopted the baby, and he is the leader at least for the moment. In the background there is potential trouble brewing with another ape who appears the have the alpha instinct. 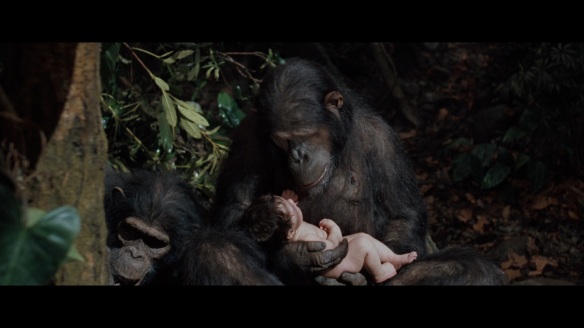 For the next half hour or so we are treated to a wordless series of events showing the maturation of the young human into a commanding apeman. He sees his adoptive father run off by the younger male  alpha, a childhood playmate is lost while Tarzan learns to swim as a way of escaping danger, and most importantly, he grows and discovers the tree-house home of his natural parents. He discovers the valuable tool of a sharp knife that will equalize the differences in strength between himself and the other apes that have dominated him. Four actors portray the character from infant to toddler to adolescent and finally adult. The adolescent version sees in the pictures that he finds in the house and notices in a mirror and the water that he resembles those images rather than the great apes he has always thought of as his family. With the aquision of the knife and and belt to carry it, he begins to assert his own status in the group. He demonstrates a great deal of savagery as he ascends to the apex position among the apes.

Christopher Lambert makes an impressive debut as the cunning and brutal human, who also clings to a love for an adopted set of parents and wholly identifies with the apes. His lithe body is more in keeping with the cruel jungle environment and food sources that he grew up with than those bodybuilding musclemen who portrayed the character between the time that Weissmuller made him a movie icon and this film. His inarticulate way of communicating is effective without seeming too primitive.  The image of Tarzan and Jane, exchanging names in monosyllabic bursts is replaced with a more painful process of of learning to speak which comes after the arrival of an excellent Ian Holm playing Philippe D’Arnot ,an explorer lost on an expedition attacked by natives who wipe out most of the expedition he was traveling with. Abandoned and on the brink of death, he is rescued by the apeman who sees more of his own kind than he has ever encountered before in this Belgian naturalist. 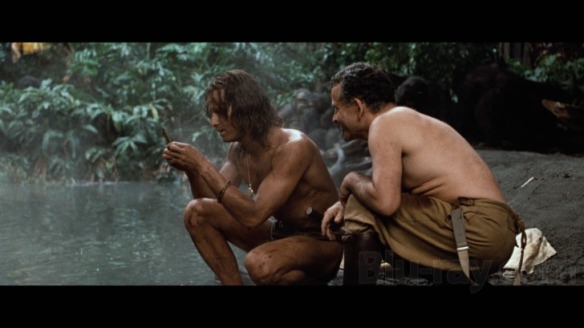 D’Arnot understands that this is not an ape but rather a man who ended up in this wilderness much the way he did. As he deduces the origins of the jungle lord, he discovers that the apeman is a natural mimic and he begins to teach him to speak. Instead of “Me Tarzan, You Jane”, the two learn words like “mirror” and “razor”. He is determined to return the man he now calls John, to his ancestral estate and his grandfather, the Earl of Greystoke.

The natural settings of the jungle are spectacular and they are enhanced with some optical effects to make it look even more intriguing.

The life of the apes is contrasted with the brutish world of civilized man and there are plenty of reasons to wonder if modern England is in fact a step up in evolution or merely a step sideways. When John is finally brought to the family estate, he is embraced and beloved as the lost son of the Earl, who sometimes cannot remember that this is his grandson and not his son. John encounters the beautiful ward of his Grandfather, Jane played by Andi MacDowell in her big screen debut. The Earl of Greystoke was played by the venerable Ralph Richardson in a performance that would be his last and which ultimately would receive an academy award nomination for best supporting actor.

The homecoming section tales up the last third of the film and it contains the warm relationship of the two hereditary Greystokes, a budding romance with Jane, and several conflicts between John and the civilized world. Despite the love and efforts that all of his new found family and friends use to help him fit in, a tragedy leads  John, who is never referred to as Tarzan in the film, to doubt that the English countryside is his destiny. The story explores the difficulty of nurture versus nature from a very different perspective. It manages to include the requisite action sequences that we want in a jungle adventure but also ask some serious questions about the nature of civilization. 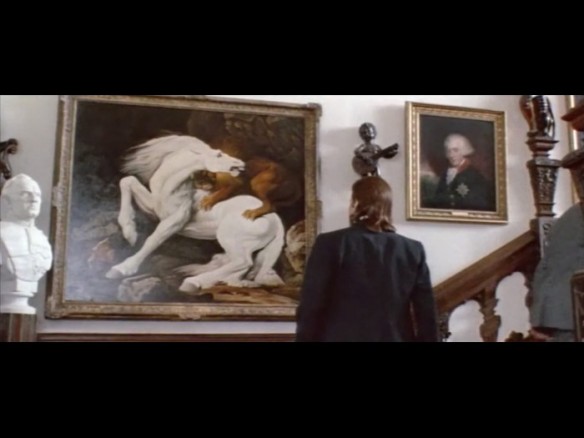 The script was by the prolific Robert Towne, famous for the perfection that is the script for “Chinatown”. This was to be directed by him, but after the financial disappointment of his directorial debut he was replaced with the English director of “Chariots of Fire”. In a pique, he demanded that his name be taken off the script and replaced. The attributed screenwriter is P.H. Vazak, which was the name of his dog. That dog became an Academy Award nominee this year in the screenwriting category, along with Richardson and the Make up team, the film had three nominations. Conspicuously left out was cinematographer John Alcott, who made the movies dark drawing rooms, rich museums, and lush jungles look magnificent.

My Dad and I had shared many Sunday afternoons watching the Weissmueller Tarzan films. As a Christmas gift one year, I had given him a book , “Tarzan of the Movies”, it was one of the first things I ever bought for him that I know he really enjoyed. That must have been in 1975 or 76. When we heard that this movie was coming we were both very excited to see it. On opening day, my wife and I took my parents down to the Chinese Theater in Hollywood to an evening screening. The film looked great on that large sized screen and all of us enjoyed it immensely. We did note at the time that he was never referred to as “Tarzan” anywhere in the film. 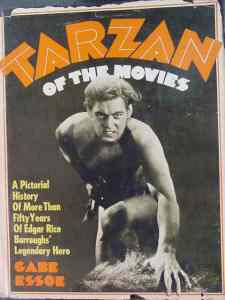 After the movie we went to Bob’s Big Boy on Wilshire and had a late dinner including a hot fudge Sunday. This was before we had kids, so it was really an adult bonding experience between the two couples and it is one of the nice memories I have of my parents. Later in the decade, I know my Dad bought a copy of the film on VHS and he and my Mom watched it many times. In the early nineties I acquired a Laserdisc copy and I still have it and it has been my main media access for the film up until last year when I sprang for the Blu Ray. I showed the movie to my own kids when they were pretty young, and although they had been exposed to “Jaws” at a young age and survived, something about the apes in this movie creep-ed them out and they never wanted to come back to it. I continue to watch it every couple of years.

The jungle sequences are the strongest but I also think that the scenes between Ralph Richardson and Christopher Lambert were quite good as well. Anne Coates was the editor and the movie played fine in the theaters, but a sequence was substantially cut back for theatrical release and it has been restored for the home version. When Phillipe and John first reach a “civilized” village, they encounter some rough locals. There is an action scene with a fiery resolution that was not in the theatrical presentation. It’s restoration helps make the middle section more coherent, and we also discover what happened to the Captain who left John’s parents to get help. The part was played by the late Richard Griffiths.

This is one of my favorite films from 1984. It is not beloved like “Splash” or influential like “The Terminator” but it is a successful realization of the kind of fantasy adventure films I’d always wanted to see. As I saw the puppet, make-up, costume and performance work of the artists of this movie, I began to imagine what a “Lord of the Rings” movie might look like if anyone would spend the money to make it. The effects revolutions of just a few years later made that vision obsolete. It may be that the time of Tarzan is passed. New cultural sensibilities and audience tastes mean that almost any film made would have to be a period piece, and I’m not sure that anyone could succeed in making something as effective as “Greystoke” is. The nice thing though is that we have this great movie from 1984 to fill our need for jungle adventure and the dream of nature tamed by a humans wit and will.

8 thoughts on “Greystoke: The Legend of Tarzan”