There are a couple of obvious reasons this sequel fails to live up to the standard of it’s predecessor, but there were so many other things going for it that it is hard to figure out why it fails. Let’s take a look at the first (and definitely the least) of the Arnold Schwarzenegger films of 1984.

Basil Poledouris is back with a reasonable score that can never match the perfection of the first but does echo it adequately so we can tell it is from the same source. Jack Cardiff, the legendary cinematographer, was behind the camera for this. Cardiff’s work in Black Narcissus is the main subject in a post I did last year on a Secret Santa blog. This work was gorgeous to look at some times but the camera does not really follow the action well. That is the fault of the director.

The usually reliable if non-spectacular Richard Fleisher was in charge. He made this and the unofficial Conan movie “Red Sonja” back to back. He has a good eye for color and set design but the action sequences do not engage and sometimes moments that should sizzle with tension, just lay there with nothing to show for the effort of the actors. The tone of the movie had clearly been lightened up and that is not his fault per se. The amount of blood is substantially less than the original Conan, and there is no nudity at all in contrast to the frequent flashes of skin in the first film. The intent was to create a more traditional adventure/fantasy film, one that would be friendly enough to broaden the audience. Unfortunately, the movie failed in that regard. It opened on a very competitive weekend, and could never break away from the pack. In retrospect, the film would probably dominated in August, despite it’s weaknesses, if the studio had waited.

The good things about the film are easy to get out of the way. Arnold is back and he still looks the part of the barbarian thief who is one day destined to rule his own kingdom.

He is the best special effect the film has. The muscles and face along with the well choreographed sword use, give the story enough to begin with. It is a quest story that involves seeking first a key and than an object to bring a prophesy to life. Conan’s motivation is provided by his desire to have his woman from the first film returned from the dead. While there were comedic moments in “Conan the Barbarian”, the character was never made a buffoon. There are a couple of sequences here where Conan is played for laughs and it undermines the intent of the story.

If you want laughs, the script provides them with a new character played by Tracey Walter. Malak is a replacement for the warrior thief played by surfer Gerry Lopez in the first movie. Malak is written as a cowardly character who has no scruples but follows Conan out of a sense of loyalty we are never given a chance to understand. The issue is not whether the character is funny, he is. The issue is whether this choice of emphasizing the funny was

right, I don’t think it was. Tracey Walter is a very familiar character actor and he is featured in an earlier film from 1984, “Repo Man“. This is a much bigger part and he gets to ham up the jokes and underplay the action. I can’t say that his presence hurt the movie, it’s just that it feels out of place in many spots.

So Arnold is a plus, Tracey Walter is a wash, that leaves us with the character elements that let down the movie. There is always a danger when you do stunt casting. Unless there is a strong reason for it, it is advisable to stay away. This film double downs on the stunt casting, tossing in basketball legend Wilt Chamberlain and singer/model Grace Jones into the film when any number of other performers would have been perfectly adequate. Chamberlain fares the worst since his character has few lines, mixed motivation and could easily have been done by any large stunt actor available.

Chamberlain was well over seven feet tall but almost no use is made of his height in the film. He is just another strong guy, there to assist and then betray the hero. There is one point where he and Arnold are pushing open a door (an activity that is used at least three times in the film for dramatic tension) and you see them side by side for a moment. Wilt dwarfs Arnold and it undermines the credibility of the barbarian for a fraction of a second.  There is nothing interesting in his fight sequences, and there is no reason to believe he is a real threat when their confrontation shows up. His character needed to be more physically active in the story and he just was not. Finally, as an actor, he is a great basketball player. Grace Jones on the other hand works a little better. She and Wilt share the same acting chops (none) but she at least has personality to plug into the story. Her character is non-essential but adds a fierce female dimension that is missing because Sandal Bergman’s character from the first film is dead. What her character lacks in terms of story and Miss Jones lacks in terms of talent, she tries to make up with in the form of facial expression. 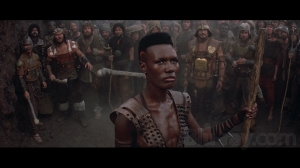 She can be silently dour or visually over the top with an exaggerated snarl that the director uses like a cattle prod to put some juice into a scene. Without a clear back story or a reason to root for her, she is unkindly used and never gets much chance to show us anything that would make her contribution to the film special.

Now we come to the biggest reasons this movie just leaves so much to be desired, the villains. Sarah Douglas looks at first as if she will be just right for the treacherous queen. Then her character disappears for the middle two thirds of the movie and by the time she is back in the story, she has become unimportant. There are three wizard like characters in the film that oppose Conan. One is played by Jeff Corey, he is the adviser to the queen. A second wizard defends the key that is being sought, he turns into a monster at one point and fights Conan hand to hand, which makes no sense for a wizard. The third is the leader of a cult that wants the horn that is revealed by the key. He is in essence a rival to the queen. The casting, make-up and costume departments must have all shopped at “Wizards R’ Us” to find the design for these three. They all are tall, wizened, with beards and cloaks. As a story element, it would make sense to consolidate these characters into a single wizard, that could then be vying for power with the evil queen. She would have had something to do and the wizards would not be reduced to cardboard stereotypes that get knocked down with regularity here.

When the wizard defending the key turns into a monster created by a mirror illusion, the cheesiness of the production is revealed. The character is basically a man in an ape mask. That he continues to wear a cloak during his battle with Conan is inexplicable. The look of the monster is disappointing. 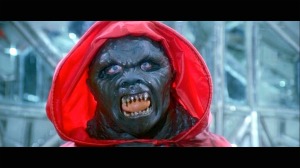 The rubber mask is obvious, there is no dimension to the expression on the face and there is nothing to indicate until after Conan has defeated him, that the monster is really a projection of the wizard. It was not a bad idea but it was badly carried out and makes the sequence laughable with the costume and make-up choice here. That however is nothing compared to the let down that Carlo Rimbaldi has for us in the climax of the movie. His work on Alien and E.T. deserves to be remembered. His work here should quickly be forgotten. The visualization of the dream god, Dagoth, is a nightmare, but not the nightmare that the film makers want. They want something horrifying that will frighten an audience and be a challenge to Conan. Rimbaldi gives us a man in a rubber suit that looks like a turd with arms.

Andre the Giant was the man in the suit and he is wisely uncredited. This is the vision that is supposed to terrify us at the finish of the film and it looks terrible. Whatever goodwill the movie had up to this point is largely lost with this disappointment.

This is the movie that killed the franchise of Conan. Every once in a while it is still rumored that Arnold wants to come back and make “King Conan”. I doubt that it will ever happen, but if it does, it will be one of the first times I will cheer for CGI created creatures to be part of the story. Live action was not good enough in this case to keep the gravy train from leaving the tracks.

1 thought on “Conan the Destroyer”