The star of E.T., Henry Thomas, returns to the big screen in a children’s action/adventure film that is a lot more intelligent and well made than most films for kids get to be. The hook of the movie is that the young hero, Davey, is playing out his fantasy of being a spy in a board and video game that he excels at, but the spy game has become real. He gets deeply involved and consults the imaginary hero of the video game on what to do as he is drawn into a real life espionage thriller. 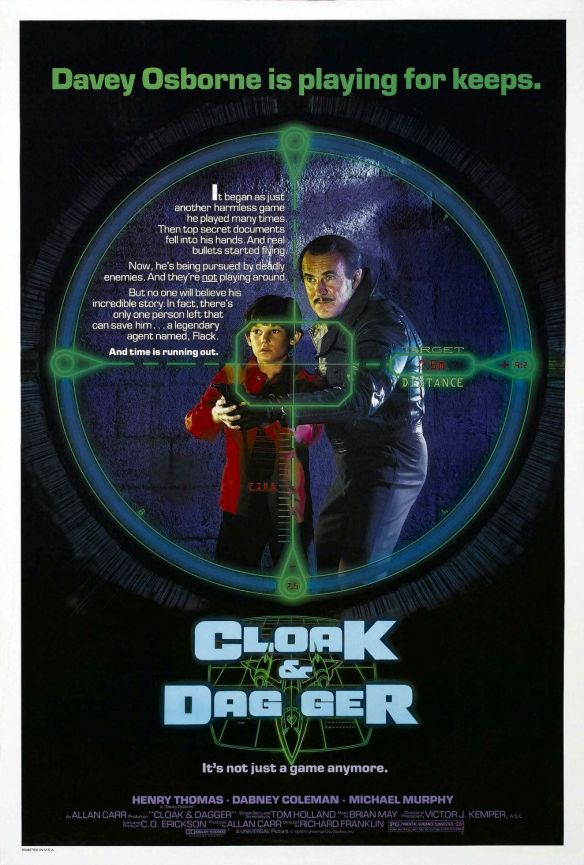 Dabney Coleman has duel roles as Davey’s father, a Master Sargent in the Air Force, and an Jack Flack, the fictional spy and hero of the board game and it’s video game version. This is the second film in which Henry Thomas plays a kid, alienated from his father who develops a close relationship with an exotic figure that makes his life far from mundane. There are no spaceships and the Spielberg touch is missing from the picture, but it is still an effective story that kids will be happy to spend some time with.

The movie starts off with a spy parody. Jack Flack, America’s greatest spy, parachutes into an embassy function wearing a retractable chute that mimics the opening of “The Spy Who Loved Me”. After taking care of the Russian security men, he manages to steal the briefcase containing important documents from a German General, An Arab Diplomat and a beautiful seductress. During his escape he is cornered and nearly mowed down by giant polyhedral dice in a tribute to Indiana Jones. This is how we discover that the hero of the story is a fictional character in a Role Playing Game. The miniature figure of our spy is located in a cardboard set on a board game that is being played in the back of a GameKeeper shop.

Davey is always the winner in the game which frustrates his friend Kim, the neighbor girl who hangs out with him because he is the only boy in the neighborhood who isn’t boring. The reason Davey is not boring is because he leads a rich fantasy life built around the spy game he loves. His mother has died recently and he is a lonely kid living with a stern father who does not understand him. This is certainly a familiar cliche in films. Just a month earlier, the same story structure was used in “The Neverending Story”. The difference is that the little boy in that movie gets pulled into a fantasy world while in this story, the boy is being pulled into the real world from his fantasy life.

Many of you will know about RPG games. I never played although my daughter liked D and D. Computer games at the time had very limited graphics and you were frequently given choices to make in the game, as if it were a story that you were writing as you went along. Console games like Atari and Coleco began to visualize those games but with very primitive computer graphics. Arcade versions of the game sucked up kids quarters by the millions in the late part of the 70s and early 80s. Sometime before the release of this movie, the gaming industry experienced a crash and had to reinvent itself. The financial ramifications were that the game version of this movie did not get widespread release and it’s not likely that enough kids played the game to make this movie a bigger hit.

Davey has two friends, Kim who is close to his own age and Morris, the computer geek who runs the Gamekeeper store. Morris is played in an early role by William Forsythe, who will go on to play crooks and cops for the next thirty years. In an attempt to play along with the kids but also get them out of his hair, he gives them an assignment to go to Techno and get some new game catalogs. Davey plays it as a game and takes Kim and a couple of walkie talkies ove 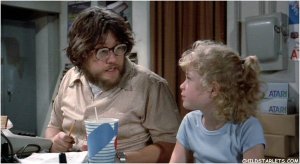 r to the high rise where the company is located. Like a character in a Hitchcock movie, he gets involved accidentally with a spy plot to steal government secrets concerning a Stealth bomber. He witnesses a murder that no one believes he really saw, and is pursued by the thugs from the spy ring.

Having acquired the secrets contained in a video game cartridge (for Cloak and Dagger, what else?), Davey looks to Morris for help in finding out what is in the disc. This is when things start to get serious. Davey’s dad is struggling to help his kid get through the trauma of losing his mother. Like all parents he worries that his son is over doing it with all the games and is having trouble distinguishing fantasy from reality. The truth is, Davey does come off as an ungrateful kid sometimes, but it is an honest type of eleven year old ingratitude. He tells his father he hates him, because his dad won’t believe his outlandish story. A story that the cops would not accept either. Of course his 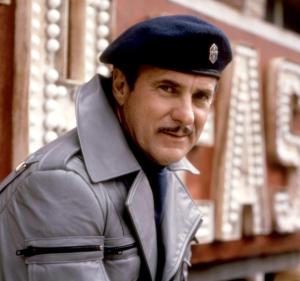 dad doesn’t believe that Davey hates him either and you can see that they actually have a warm relationship. That’s probably why Jack Flack appears as a doppelganger for Davey’s dad Hal. Davey just needs his dad to be the kind of hero he wants rather than the kind he really is, a struggling father who is worried about his boy. You know at the end of the movie there is going to be a reconciliation between these two versions of the father and in the end it plays out pretty nicely.

The movie turns into a chase film with Davey trying to get away from the spy ring, rescue the little girl Kim from the thugs who have kidnapped her and get the authorities to take his spy story seriously. The one thing that I most remembered about the film from the one time I saw it in the summer of 1984 was that a lot of the chase involved the Riverwalk and the Japanese Gardens in San Antonio Texas. The movie at one point was accused of being a big commercial for Atari, but the San Antonio Visitors Bureau are the real beneficiaries of any endorsement. The tourist areas look clean and attractive and who would not want to visit the Alamo and then cruise down the river in the middle of town and enjoy some ice cream?

There are several character actors in the film besides Forsythe that people familiar with the time period will recognize. The main bad guy is played by Michael Murphy. Murphy still works in film and television, he may be best remembered as the star of  “Tanner 88” a mix of fictionalized presidential candidates with real ones in an early HBO series. Showing up as a sympathetic police Lieutenant is Robert DoQui, who gets demoted to Sargent in the Robocop movies a few years later. Stuntman/actor Tim Rossovich plays one of the thugs and he gets more screen time here than usual. Rossovich is a former NFL player who was roommates with Tom Selleck during their time at USC.  His brother Rick was also a fixture in movies in 1984, playing a cop in “Streets of Fire” and a street punk in “The Terminator”.

During a chase late in the film, Davey has to drive a car and it shows that he has never been behind the wheel before. So often in movies like this the precocious kid is an expert at everything. It gives the movie a lot more credibility that the car scraps and bumps and smashes into almost everything and that Davey has trouble figuring out how to turn the steering wheel the right amount. Jack is no use since he only knows the spycraft that Davey knows from playing the game.

In the end, the character has to trick Davey into saving himself by using a gun and it is a fitting end to the character. The one thing that did bother me was the inconsistency of the relationship between Jack and Davey. Sometimes Davey listens to Jack’s advice and treats him as a real character, other times he ignores the advice and acts as if a fictional character could not understand him at all. The screenplay was written by Tom Holland who would write and direct one of my favorite 80s films the next year with “Fright Night”. The switch in loyalty and trust seemed to be a nut that the screenwriter and director had a tough time cracking. It is not a major distraction to the movie but it does keep it from being as memorable as it should be.

The ease with which people are getting into the airport at the climax of the story will be a interesting cultural difference for those living in a post 9/11 world. People could get right up to the loading gate without a ticket, and the screening lines sure went a lot faster. There is another nice Hitchcock twist involving some friendly characters in the film but it would be unfair to spoil it for you.

Thomas is good but you can see how much difference a director like Spielberg can be in getting a natural performance from a kid. This movie did nothing at the box office and disappeared from the charts after it’s second week.  It’s a nice little kids spy film and I can’t for the life of me figure out why I never showed it to my kids. I guess they were so used to seeing James Bond on the TV, that a kids version would not make much sense to them. “Cloak and Dagger” is a relic of 1984, it is interesting and mildly entertaining but it is not essential.