In the early eighties, Jessica Lange became the darling of the film community. She was nominated for two Oscars in the same year in 1982, winning for Best Supporting Actress in “Tootsie”. Within three more years she had two more nominations for Best Actress, including this lachrymose piece of save the farm themed drama. She is also a producer on the film which makes it a little surprising that it did not get a Best Picture nomination, that is until you see the movie. Then you will understand why she is the only person given any kudos for the film, and also why the far superior Sally Field performance was the winner this year. 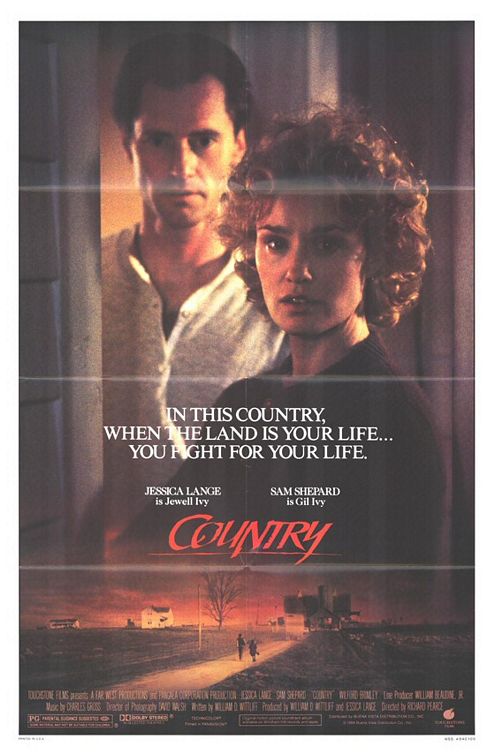 This is the second of the three farm based prestige pictures of the year. It is also perhaps the dullest, with a plot driven by accounting rather than action, and a pace that sometimes feel glacial. It is a sincere effort to examine the impact of financial pressures on rural families, but the result is depressing and takes down one rising career to advance another. The Ivy  family finds that after the harvest and the sale of their grains, they are slipping quickly into insolvency. The FHA has figured this out before they have and has basically garnished their check from the grain lot. What follows is fifteen to twenty minutes of creeping realization that their debts are more than they can handle and that they could soon lose their farm. Watching the slow build up of a dawning financial wake up call is not very entertaining or dramatic. Seeing Jessica Lange sort through the drawers of the dining room buffet and push the buttons on a calculator with a pencil is not most peoples idea of good story telling. 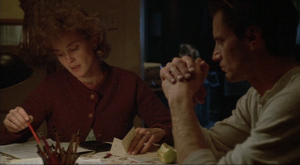 The film feels like a polemic on the evils of government subsidized loans. In fact, Jessica Lange was invited to testify before Congress about the Agriculture policies of the government. I guess being a movie star makes you an expert on equity, foreclosure, debt and grain prices. Early on in the story she and her husband Gil, played by Sam Shepard, fight together to find answers and to challenge the decision of the FHA.  Gil pleads his case to the local FHA representative, who helped him with his loan several years before. Now it appears that some sinister force in the government wants to call in the loans and drive all the farmers out of business at once. The local guy is played by actor Matt Clark, who is still working today, usually in the thankless role of ineffectual journalist, public official or layabout. Earlier in the year he was the Secretary of Defense in “The Adventures of Buckaroo Banzai”. Last year he was one of the sparkling moments in “The Lone Ranger“.

Matt Clark on the right.

It is the outside FHA guy who is putting pressure on the local man to bring his numbers up. The slick three piece suit of the head honcho is a replacement for the twirling mustache of the villain from a silent film with Mary Pickford. The rumpled look of the local guy is a contrast to the old school way of handling loans and he looks uncomfortable in the new reality, but wears his officialdom well for two of his following three scenes.

The weak link in the story and the career that just might have been derailed by this film is the character of Gil and the performance of Sam Shepard. Don’t get me wrong, he does a fine acting job in the movie, maybe he is too good, because his part requires him to transform very quickly. Gil starts out as the kind of honest farmer and loving father and husband that everyone would want to be their neighbor. After being stymied for half an hour he becomes a sullen, alcoholic, abusive loser who you want to punch in the head. He can’t be bothered to go to the aid of his suicidal longtime friend. He bullies the bureaucrat that sympathizes with him and he beats both his wife and kid. 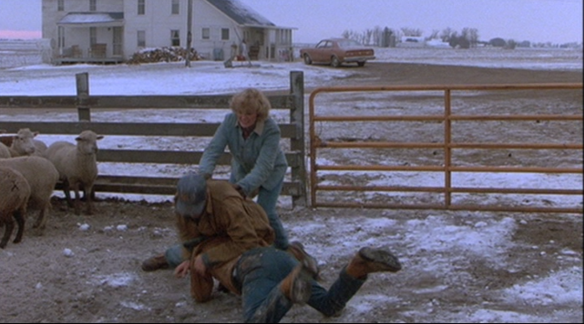 It’s bad enough that poor Jessica Lange has to face the barren rural winter with a baby on her hip and prepare a home-cooked meal every night. She has to listen to her father bad mouth her husband and break up a wrestling match between her son and his dad. When Gil takes a poke at her, the farm suddenly seems the least of her worries. Her character Jewell, takes the abuse seriously, but the speech she gives her son later on, sounds like one of those PSAs that have turned up since Ray Rice popped his fiance. She is an apologist for his actions and in 1984, we can see her point of view. Today, she would be excoriated for making excuses for her abuser.

Also in the background of the film is America’s favorite curmudgeon (after Ed Asner), Mr. Wilfred Brimley. He is also in his second film from this project’s list having appeared in “The Natural” back in the Spring. Grampa appears to be a supportive family member, loved by the kids, working with his son-in-law and generally being a mensch in the first part of the film. When the debt issue comes up and his own father’s horse harness gets included in the auction items, he turns on a dime and wishes his daughter’s husband had never set foot on their farm. 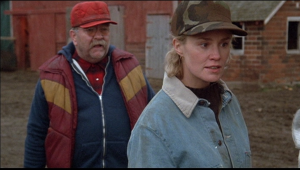 He blames Gil for mismanaging the farm, although he was there every step of the way, along with his daughter. I guess the moral of the story is that the family will eat it’s own when in dire straights. The problem is that it is all overdone and under developed. This is a script that is so interested in showing us how awful farm policies are to the American farmer, that it abandons the realistic characters it created in the first half hour, in favor of the emotional blackmail for the last hour and a half.

The film does squeeze out an artistic achievement despite the script. Jessica Lange is a real woman in a tough life, but she makes it all believable. When she valiantly protests against the repossession of her friend’s sheep which have been hidden on their farm, it sound like the angry but ineffectual rant of an average person against an unjust bureaucracy. She is bewildered by the callousness of the FHA decision to liquidate the family farm, as any of us might be when faced with a dunderheaded government decision. The rationalization she gives for her husband’s boorish behavior, sounds right coming from a wife of twenty years who has had only love in that relationship before things go sour. The script can’t leave well enough alone though and she is given a battle cry speech to make at the auction she manages to undermine in a completely illogical but heroic manner.

“…when you come out to pull us off of our land, you better come with more than a piece of paper.” 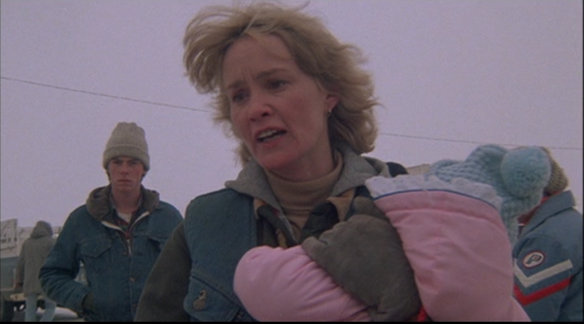 If that threat were made by a Tea Party member in today’s political climate, people would be screaming that she was a violent anti-government potential terrorist, instead of the distraught and angry farm owner who is defying an unjust takeover of her property. This is the overblown scene that would be the subject of every film clip during awards season. It worked well enough to get some recognition for the performance, but it can’t redeem this overlong, dull and rabble rousing film. That last pairing of terms might sound like an oxymoron, but see this movie and you will know that they can be simultaneously true.